A Test of Our Democracy: How Far Ghana Can? 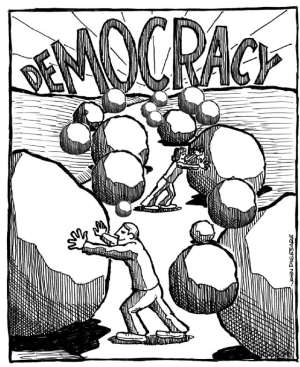 A democracy of 56 years will be tested in Ghana. Prior to this, a democracy of over 200 years had been tested in the United States by the presidential election of 2000. This was after on election night, no clear winner emerged. Print and broadcast media cited often contradictory exit-polling numbers, and the races in the States of Oregon and New Mexico would remain too close to call for some days. Ultimately, the contest focused on the State of Florida. Networks initially projected the democratic presidential candidate Al Gore the winner in Florida, but later declared that Bush had opened an insurmountable lead. Al Gore called the republican candidate George W H Bush to concede the election, but in the early hours of the following morning it became apparent that the Florida race was much closer than Gore's staff had originally believed. Fewer than 600 votes separated the candidates, and that margin appeared to be narrowing. (http://www.britannica.com/EBchecked/topic/1570192/United-States-presidential-election-of-2000). At about 3:00 am, Al Gore called a stunned Bush to retract his concession.

It is now clear that Ghana follows the United States in a post-election legal tussle and members of both parties are red eyed and poking semantics at each other, while waiting for the verdict only God knows how long! In the case of the United States, the verdict delivered denied then presidential candidate for the democratic party Al Gore the opportunity of the white house. The republican candidate George W H Bush became president and will subsequently serve for two terms. This case went down in US history and legal pundits have their various interpretations.

The similarity between this case in the US and that of Ghana is obvious. The good thing about this case is inherent in the legal tussle which in itself is a fundamental test of democratic credentials. While 200 or so years of democracy had been tested in the United States, Ghana's democracy of 56 years is on test now. My sense and understanding of this legal case is what NPP is doing consolidates our democracy above anything else. Our democratic institutions need to be tested and strengthened, especially our judiciary. As we proclaim independence of the judiciary which is a provision in our constitution, there is need to exercise patience, wait and see how the system reveals itself.

I do think that NPP legislative members can still participate in the proceedings in parliament and yet carry on with their court case. I say this because, the CJ and the judges impaneled for this case is a test of their integrity and a test of our democracy by and large. Note that this case is being monitored and followed internationally. Of course, no judge wants to ruin his/her career by being partial. In light of this, I am confident they will look into this case with a lens of impartiality, a cloak of non-partisanship, examine all evidences and merits of the case and dispense impartial justice accordingly. Our judicial system must be trusted … our judges are intellectually upright unless I am proved wrong that they are intellectually bankrupt.

The author has 64 publications published on Modern Ghana.

I Felt Very Safe Under Mahama – Manasseh
57 minutes ago