Are You Stupid To Run Again? 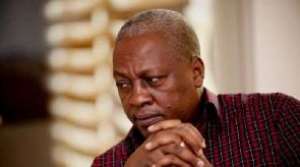 When I submitted my proposition on why I think the coming back of JDM is not a wise idea, it received mixed reactions coming from sympathizers. I still stand by my stand that former President John Dramani Mahama should not and never trade-off his hard earned political gravitas by committing this multiple thought of running again into action. If he does it, however, it tells me that it is still abundantly clear that lessons have not been learnt after the excruciating defeat of the NDC party in 2016. I will then be convinced as an analyst that I have been vindicated by my submission that those who had the president’s ear leading to the defeat are still having his ear and doing a poor job of simple pedestrian analysis.

Take a look at JDM’s political journey and be informed that he is on his way to being one of the tested statesmen Ghana had ever produced: he served his country very well in various capacities as a member of parliament (MP), as a minister, as a vice president (VP), as an acting President and then contested elections and became president. In line with this political trajectory, he has accumulated vast expanse of knowledge and a well of experience that it becomes expedient for him to take a back seat and be a resource to all parties.

Former president must beware of these good-for-nothing-laggard sycophants who are cunningly crafting their way to his downfall. The John Dramani Mahama we all know is a fine gentleman but it appears he is being forced into this unsavory plight to contest his party flagbearership. You do not need a crystal ball to infer an imminent disaster should you not clinch the nomination again this time around. The worst even waits after you probably have clinched the deal:

The good news is that if any of the would-be NDC contestants wins, then it becomes a huge challenge for the ruling party. Elections will be vigorously fought between the campaign promises of these new guys against Nana Akufo Addo’s 4-year record. The less political baggage they have, the easier their message sinks and we will probably be at the cusp of yet another political upheaval.

You should've looked for concert house for that meeting, I'm...
34 minutes ago