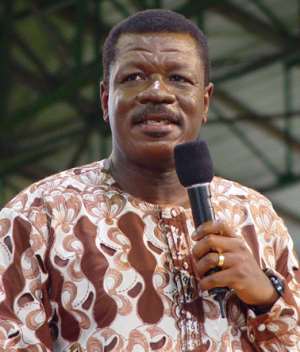 I don't know who the campaign strategists of the Mahama for President Campaign are- however if they are as politically savvy as I know they are they would walk away from the brewing brouhaha with Pastor Mensa Otabil of the International Central Gospel Church.

Don't be fooled by the steely outward posturing of the Mahama Campaign because deep down their hearts they know that this is one fight they didn't want to be engaged in 20 odd days to a very crucial elections.

Trust me if I say that I have been speaking with some friends who are dyed-in-the-wool 'Akatamansonians' who believe that Pastor Otabil was wrong and that the Mahama Campaign was right in unleashing the 'attack dogs' on him.

Following this I asked them a simple question. Is Pastor Otabil going to be on the ballot on December 7th 2012? Definitely not.

In a difficult election which is expected to be decided by swing voters who tend to side with the campaign that represents change rather than continuity the ongoing media slugfest between the Mahama Campaign and Pastor Otabil should be put to bed immediately if President Mahama's fortuitous one-touch victory is to be salvaged.

Political strategists the world over would tell you that incumbents lose elections rather than the opposition winning elections. This reality is anchored on a mix of variables including voter apathy and voter appetite to punish the government in power.

Is John Mahama in charge?
Since the issue with Pastor Otabil emerged I have been left to ponder over this question. And I am confused. The John Mahama I know (from a distance though) is a rational choice person. Rational choice people are calculating, meticulous and attach a lot of importance to detail.

However on the simmering battle with Pastor Otabil I think I didn't see that trait come through. Rather I saw the hawkish elements of the party lead the way in the use of choice expletives on the man who is highly revered by a Ghanaian population which is 60 per cent Christian.

This is quite unfortunate to say the least. As I mentioned earlier this is not the time for the Mahama campaign to pick up such a fight. Moral suasion is another veritable variable in assessing a party's fortunes in a close election like the December 7 elections.

Election watchers are not giving any serious thought to the talk about a one-touch victory being posited by both campaigns because this election is so finely poised that it is highly unlikely that it would be won in the first round pure and simple.

Independent or swing voters especially those in the city and within the educated demographic would not be attracted to the Mahama-Amissah-Arthur ticket because the campaign couldn't rein in party leaders who launched a tirade of verbal attacks on one of Ghana's most influential and venerated men of the cloth.

For the past three decades Pastor Otabil has assumed the stature as the unofficial Pastor of the nation by using his pulpit to transmit a message of hope and faith to homes across the country and beyond.

It would be foolhardy and the height of political naiveté for any campaign to think that engaging such a figure in a media war would not have any repercussions on their political fortunes. If people in the Mahama campaign are leaning towards this mindset (which I sincerely doubt) then they should be planning for a long stay in opposition.

This is how elections are lost by incumbent governments. And it is born out of cockiness. In my years of covering political elections across the world I have realized that cockiness more than any other variable accounts for the reversal of electoral fortunes for incumbents. Just as the Dutch Disease afflicts countries with oil and other natural resources cockiness is the main cause for electoral losses suffered by incumbent governments.

And in this election as well as several elections I have covered I have seen and continue to see overconfidence destroy campaigns that otherwise had very good prospects. In 2000 it invaded the camp of the ruling NDC and brought in President Kufour. The same thing repeated itself in 2008 when agents of the ruling party let down their guard, became complacent and lost the election to then Candidate Mills.

Campaigns must be warned not to trust so called strategists because most of them are soldiers of fortune. Strategists are not hot-heads, steam blowing, adrenaline junkies. Rather they are calm calculating and sharp.

For example a good campaign strategist doesn't get too excited in the heat of an electoral contest against a very formidable opponent by encouraging words that offend the sensibilities of the electorate. Recently the campaign coordinator of the Mahama Campaign was forced to apologise for making very tawdry comments about the Melcom tragedy. He is lucky to still be at post. Though these unfortunate goofs are unavoidable they must be dealt with forcefully when they occur so that it does not hurt the campaign.

As we prepare for the elections in a little over three weeks messaging should be the primary focus of the campaign.

If the NDC wants to remain in power they would have to let their achievements do the talking for them and not be sucked into unnecessary battles that could cause irreparable damage to their electoral fortunes.

*The writer is a Freelance Journalist, an Author and the Executive Director of the Center for Investigative Reporting Ghana. He lives in the city of Accra, Ghana.