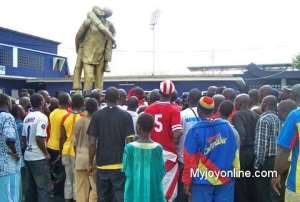 I went to the stadium in the company of my bosom friend, the late Tony Owusu Amofa, Fiifi Tackie and Michael Oti Adjei (I believe).

We were at the stadium to report on the match of the day and as to be expected the supporters of Accra Hearts of Oak and Kumasi Asante Kotoko were in the stadium "in their bulk" (apologies to Harry Zakkour).

I was a Staff Writer at the Ghanaian Chronicle (oh I was versatile and very adaptable). Tony and Fiifi Tackie were with Radio Gold, while Michael Oti wrote for Kwabena Yeboah's Africa Sports.

For me the headline was written when Referee Joseph Wilson Sey aided by his assistants controversially awarded an "offside" goal to Hearts of Oak. And all hell broke loose.

To register their displeasure at the decision of the match officials and incensed by the 'little matter' of a rival getting one over you, a section of fans at the famous Osu stand of the Accra Sports Stadium ripped off some seats and hurled them onto the field. It was a scene not witnessed at the Accra Sports Stadium. At least not in my lifetime.

(The red, yellow and green seats, which were turned into projectiles by the fans were shadily procured from Compu Praha, a Czech based company through Rekoc, a local company owned by a former Vice-Chairman of the Ghana Football Association. The procurement became the subject of a government inquiry back in the day. That's fodder for another story.)

At this point, the police contingent at the Stadium had moved in to the scene to try to contain it. Some rounds of tear gas were fired and fans hurtled towards the stairwells to escape the stinging and obnoxious fumes from the "meanest" member in the undignified family of crowd control measures. If you have ever been stung in the eye by the fumes of a tear gas you would understand those fans.

Well, after the incident with the tear gas, we hurried out of the press box and headed for the car park opposite the notorious Castle Annex. In less than 5 minutes Tony received a call. It was from one of our colleagues whose name I cannot readily recall.

"Chale, tune in to Choice FM! Something terrible has happened." Instinctively we knew something horrible had happened. Our response was quick. We turned the dial to 102.3 FM and the dry, rasping voice of Sannie Darrah (who was then reporting for Choice FM) confirmed our worst fears.

Sannie was reporting that there had been a stampede at the Osu Cemetary wing of the stadium and several supporters had been crushed on the stairwell while making their way from that stand.

True to his words, when we got to the scene and we were met with a scene that was utterly astonishing and traumatizing. Right before our eyes were scores of what looked like lifeless bodies strewn all over the floor receiving all the "care" people around could give.

In the absence of caregivers and early response professionals, these precious souls were ferried in the bucket of pick-up trucks to triage centers which had been set up in government hospitals around the Stadium, while other private vehicles were commandeered to serve as makeshift ambulances.

Credit goes especially to Mr. Herbert Mensah and all those public-spirited individuals who were on all fours to save lives and limbs. Though the rescue situation was not ideal, they gave so much to save their compatriots who did not have to die for watching a game of football.