The “Green Book” Is the Final Nail in Mills’ Coffin. 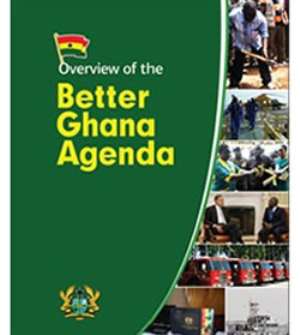 It is not by accident that the section on “Governance- Transparency and Accountability” in the “Green Book” touting Mills achievement is relegated to the last part of the book. It is also not by accident that this section is also the thinnest of the four “thematic” areas in the book. For Mills has failed miserably when it comes to the NUMBER ONE reason why he was elected: to govern.

So without wasting ink on the free school uniforms, founder's day, the phantom 1.6 million jobs and other childish achievements in the other three “thematic” areas in the book, let us put Mills' governance under the microscope. In honor and in the spirit of the Green Book, we shall do so in a list-like form. And just like the “book of underachievement,” the below list is an “overview” of what Mills has done in 4 years. If certain things below in any way sound unnecessary and petty, always remember, my template is the Green Book

-“Everyone is a president under Mills,” as revealed by P-ndc MP for Lower Manya, Teye Nyaunu, unprecedented.

-“The Politics of Financial Influence,” as observed by the wife of the PNDC chairman, unprecedented.

-30 or more reshuffling in the first term; an unprecedented achievement in the history of democratic Ghana; including two corrupt Attorneys Generals –historic.

- A government full of “greedy bastards,” as pointed out by the PNDC Chairman, chopping the nation's money left and right.

- Ministers and party officials fighting over state loot in the media, unprecedented.

-Media Boycott, another unprecedented benchmark.
- The President's whereabouts have become a national headache anytime he is abroad, unprecedented

-Comparatively - Arkah, the sleeper Mills, Aliu- John D. Mahama is the most corrupt VP of the 4th Republic- his scent all over Amajaro, STX, and historic Loans.

-And most important, a president who is not in charge, unprecedented; e.g., twice ordered Woyome's payment stopped, twice disobeyed.

-Culminating in the poisoning of the national discourse with “Team B” discourse.

-Insults have now replaced AIDS and other traditional ailments as the number one national menace. Check the churches, the durbars, and the president's own “hypocritical “cries, to get an idea.

-Propaganda at unprecedented levels .e.g "sheep is a cow." Factoid is the watchword.

-Foot soldiers on rampage: DCEs chased out office; Ashanti regional minister and Upper Manya Krobo DCE ,classic examples; seizure of tolls and public toilets, burning of party offices and forced closure of state offices, all without consequences on the part of the perpetrators.

-The intimidation of the Judiciary.
-“Heroes Fund” established to reward actors of political violence, also unprecedented.

-The unprecedented electoral violence in Atiwa, Chereponi and Akwatia etc

- The physical harassment of the former first lady by thugs in the President's own hometown while on a “Thank You Tour” after the FONKAR-GAMES.

- all laying the grounds for the violence that has come to characterize the ongoing biometric registration; 12 year old shot; opposition Constituency organizer shot and killed..A sign of things to come in December?

-The abuse of the law of “causing fear and panic.”

-The collateralization of oil for more than 10 years.

-The invasion of the courts by BNI, also unprecedented.

-Failure to win more than 30% of legal cases in three years* - the Amajaro case is an unprecedented example. Another one is Tagor- ruling overturned. Woyome is seemingly heading that way. *Not a constitutional mandate but it should be.

CORRUPTION.
-The pacesetter: C1.6 billion on “Tea” during Transition, unprecedented

-$400 million for Castle operations; was $30 million in the final years of the NPP.

-M&J scandal. Though the bribery occurred under the PNDC chairman in the 90s -a key figure fingered when the scandal- Dr.Sipa-Yankey, is now the head of newly established Ghana National Gas Company. “The cat in charge of the mouse?”

- GHc9 million for FONKAR-GAMES.
-And last but not the least, the gargantuan of them all, the legacy defining, his stain, his scar, his stigmata: $500m in judgment debts in 3 years -$52m to party financier, Austrian Counsel and Chairman of the board, A.A.Woyome

CONCLUSION:
In spite of truly “unprecedented achievements” such as NHIS, Metro Mass Transit and the rescuing of the economy through the HIPC initiate, no way Ghanaians would have renewed Kufuor's mandate had he performed this horrendously –like Mills-in “Governance” in his first term

And that is one thing Mills and his team of propagandists must remember, that despite the “free school uniforms” and “school under trees,” Ghanaians have not seen any significant improvements in the three thematic areas -“Economy,” “Investing in people” and in “Infrastructure”- except the invention of the word “unprecedented.” But we have experienced degradation and rot in “Governance,” unprecedented in the history of Ghana.

The biggest question still remains though. Would Mills be held responsible for this poor governance since he himself has stated that he is not a policeman or prosecutor? December would surely deliver the answer and surely it would be an “unprecedented” one term president.