Are "Joy" And "Peace" Against Nana Addo? 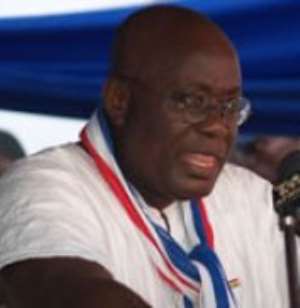 I 'm now almost convinced that Joyfmonline and Peacefmonline have an agenda -nearly imperceptible- against Nana Addo- after peacefmonline published an article by pro-NPP opinion writer Professor Okoampa in favor of the P-ndc. So kindly bear with me while I explain my suspicion.

As a political observer and weekly writer of opinion articles , -mainly published on Ghanaweb, Joy online, peace online and modernghana.com-not only do I visit these websites to check on the daily news, I also have the added interest to check to see if and when my articles get published.

Most important, I check daily to see my competition-the prolific opinion writers whom I'm trying to emulate, whether they are for or against my party the NPP. As such, I can confidently state that I have a fairly good idea about what is going on on these sites.

CASE STUDY ONE: Opinions/Articles/Feature
For the past three years I was doing pretty well in the sense that my articles were always published every time I sent one in. But since this year, with the exception of Ghanaweb and modernghana.com, my articles rarely get published on "Joy" and "Peace."

At first I thought maybe my writing skills had diminished or maybe I was not making sense any more. (I for example am not the best grammarian –maybe due to my Antoa blood). Then I began to realize that many pro-NPP writers like Okoampa, Adofo, Sarpong and others were also not getting their articles published as frequently as say, a year ago.

On the other hand, pro-P-ndc writers like Pryce, Jackson and Borkor almost always get theirs published. Furthermore, if a pro-NPP article manages to "sneak" in, it seldom gets the "front page" making it very hard to find. And those that manage to get posted are either that that do not hit the ruling government hard enough; or when it is anti-NPP piece like pro-NPP Okoampa's article cited in the opening paragraph; or when it not exclusively directed at Mills or his government.

In fact on three occasions, "Joy and "Peace" have published rejoinders to my articles without publishing my articles -which drew the former in the first place. And the last time Joy,for example, posted my article was an article dealing with the Woyome petition against Mills at the White House, which I strongly suspected was published because of the reason I gave for signing the petition - the boycott of Multimedia by government.

However some known NPP gurus like Gabby O.A.Darko and Dr. Kennedy always are featured. The only problem is that these two gentlemen do not write as often as they used to. And I believe that they get published because they know people at "Joy “and "Peace." Or maybe less is more?

The notorious Professor on the average writes two articles per week. He was missing in action on "joy" and "Peace" for some time till the latter published the piece referred to in the opener- what were the odds for an anti NPP piece?

CASE STUDY TWO: Political Shows-News.
The one advantage "Joy and "Peace" have over the other websites is that they generate their own news reports based on in-house radio flagship programs such as "joy morning show," "Newsfile," "Kokrokoo" etc. Now, when reports are written by these websites based on their in-house programs, seven out of ten usually carries a pro-P-ndc headline. For example, a typical headline'd be "Ablakwa said this" or "Felix said that" etc. Three quarters of the report'd usually be devoted to what the P-ndc "spox" said on the show with only a paragraph or two for the NPP representative.

I don't know whether there exists a journalistic rule which says that government's position or spokesperson should always take precedent over non government representatives or positions. But whatever it is, it is a cause for concern for NPP going forward. Millions might hear something on radio but what is written down will last forever-google political news five years from now for historical or research purpose and you 'd get an idea of....

CONCLUSION.
To give "Joy and "Peace" the benefit of the doubt, it is quite possible that all pro-NPP opinion articles are always very insulting -since the beginning of this year- or are poorly written or based on fiction. Or as in “case study two," government spokespeople are always abreast with issues and thus make more sense than their NPP counterpoints hence their domination of headlines most of the time.

Whatever it might be, you be the judge. But never forget that former deputy information minister, now a deputy tourism minister and P-ndc MP candidate for Akwatia Baba Jamal was caught on tape urging journalists -through inducements- to change “sheep into cows” any chance they got to make government look good.