Nana and the PNDC Chairman....Dumbstruck! 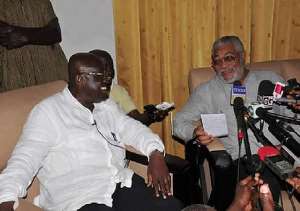 I just don't know what to say or write. I have tried but my thoughts are disjointed. Maybe it is too early.... But the thoughts have been haunting me for the past 24 hours. But…

But to attend and kowtow to him like Obama at the Saudi Crown Prince's palace is..hmm ..Hmm too not not not…hmmm. Could this be the biggest faux pas since the “beach rallies?” Yet would it matter since the P-ndc are going to rig the elections…unless of course we stop paying visits to killers!

In 1979, the UNC betrayed the UP Tradition by siding with the PNP in the second round instead of sister party, the PFP. It is therefore quite possible that what is expected is a repetition of history by the bloody and “greedy bastards.” But that is a big time gamble. For they don't play like us. They don't betray their “kind” as some one recently reminded me.

But could it be considered a “betrayal of some sought of the core principles of the UP Tradition? Hmm…Is the country now a one party State masquerading as a fledging democracy? Are those on top “hobnobbing” behind closed doors while putting on a show, a reality show, for us? Are we watching soap opera with “kum ba ya” as its soundtrack? Hmmmm

The tactical rationale behind the visit is understandable and quite too obvious! But was it necessary…simply because he had been critical of his “kind” lately? Is it possible for a lifetime violent abuser of democracy to undergo a “Saulian Metamorphosis?” Is the UP Tradition so weak that it now has no choice but to seek a deal with the “devil” in a war that pales in comparison to the one fought by our fathers in pre and post independence era?

Yet Nana knows best. However, this move will alienate many…. in the LONG TERM. Its effect will be felt post-elections and beyond. And this we know for sure: that if the current NPP were that strong, at least from the power brokers' point of view, this “Holy Alliance” wouldn't have been sought. Or the options: that the interest group –advisors- within the party which fought for this move lacked genuine UP bloodline – seeking consultants and polls like the ancients used to seek oracles – or they were the elitist of the elitist within the current structure of the party. As some wise man once said, “some ideas are soo dumb that only intellectuals tend to believe them.” Hmmm

But….If it is the “weak” option, then it doesn't speak well of the party and its current structure and make up. It nearly smacks of a slap in the face of all those who have fought the battle for the past three years…..only for the victory laurels to be snatched by…..

But my thoughts are disjointed. Maybe it would have been wise to sleep over the matter for a couple of days as the wise men prescribed.