Republic Day: The Road to Dictatorship 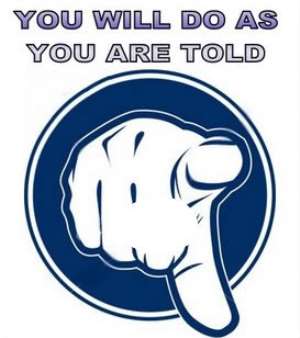 The 1957 Constitution and independence didn't grant Ghana full sovereignty. For example, in the 1957 Constitution, executive powers were vested in Her Majesty the Queen through her Governor-General who was also the Commander in Chief of the armed forces. The Governor-General was also required to appoint the prime minister from the largest party in the Legislative Assembly.

Thus it was important for Ghana to seek Republicanism if the country was to take full control of its destiny. In general, the call for Republican status in 1960 was received with much enthusiasm. But the country and the world would soon realize the real intentions of Nkrumah and his government.

The world was really watching the first African experiment. And with the majority in the 104 seat Assembly, there was nothing to stop Nkrumah-except self restraint.

The whole Republican process was indeed a dress rehearsal for what was to come a few years later.

First of all, the ruling CPP refused to call a Constituent Assembly, as it was historically done, to deliberate and draft the new Republican constitution. Stakeholders such as Chiefs, Muslim councils, ex-servicemen, Unions, women organizations,the civil service to churches were excluded- contrast the 1992 constituent assembly.

Nkrumah simply converted the CPP dominated National Assembly into a constituent assembly. Then after the CPP majority in the pseudo constituent assembly had finished writing the Constitution, universal suffrage wasent sought. Rather a referendum on the question of Republicanism- a foregone conclusion - was conducted.

Third, Nkrumah took advantage of the excited but uncertain period spanning the first draft of the constitution, the plebiscite- 13th March 1960 to 13 June, 1960- to the final draft presentation to the National Assembly to sneak in some major pointers.

For example, a paragraph in the declaration of fundamental principles:

was changed into
"that no person shall be deprived of his property save when public interest so required and the law so required."

An animal called "Special powers for First President" was also snuck in. Basically, this special powers gave Nkrumah the right to discount the laws of the land in times of crisis as flimsy as a deadlock between the president and parliament-the infamous Article 55. Nkrumah already had the Emergency Powers Act and the Prevention Detention Act in the bag at this stage. But he wanted more.

The president was also given the discretion to fire the Chief Justice at will in this Republican coup dtre. No wonder Nkrumah didn't want to call a real constituent Assembly or encourage suffrage; the country would have rejected the constitution completely.

Yet the opposition did not go down without a fight; protesting, protecting and warning the nation against the impeding dictatorship. Nkrumah had also wanted sole discretionary powers to give out loans from the public purse. This was taken out of the final draft. But its replacement was not any better though not as offensive as the original.

The loophole craftily designed to give the Attorney General the implicit right to stop civil cases against the Republic was also closed. In all, the opposition was in reality paralyzed. Three year after independence, many were under PDA, many more imprisoned and the rest in exile. Great leaders do not take advantage of their people even in their ignorance and even when absolute power is surrounded to them. But Ghanahad drawn the short stick in this corner.

The Republican constitutional bill, which had been approved by less than 150 people with no universal consultation and suffrage would come into being after its second reading.

On June 30th, 1960, the Governor-General, the Earl of Listowel, said his final good bye in Parliament. Ghana became a republic on July 1st, 1960. "Your Excellency” was dropped in favor of "Osagyefo."

Four years later, Nkrumah would declare the Republic aone party dictatorship - employing the tactics rehearsed and perfected during the republic process - and the seven year old country would be plunged into a forty year dark age.

AFTERWORD
According to Peter Ala-Adjettey- in his "Kronti ne Akwamu lecture Series" on the 4th Republic parliament- the deliberate powerless structure of the current parliament stems from the history of the legislative abuse of sovereignty in the 1st Republic. The framers of the 1992 constitution like their1979 counterparts did everything possible not to go that route; though the former ended up tipping the scale too much in favor of the Executive.