The Libyan Crisis: The Point of No Return 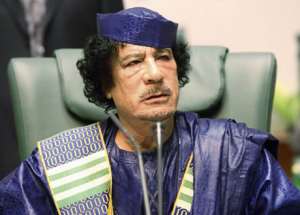 By now, the reality of the situation in Libya must be clear to all that the political crisis cannot be resolved by NATO's military campaign. All the Doubting Thomases must rise up to be counted. Those still deluded by NATO's persistent bombardment of Tripoli and anything considered as pro-Gaddafi to think that the rebels are winning the war must be jolted by what is obviously evident.

Some glaring issues make it undeniably clear that the dynamics of the Libyan situation are becoming more complicated. At least, we can infer from some of the latest developments to suggest that those who think that the military campaign by NATO will resolve the Libyan crisis are deceived. The BBC has provided some of these events, which I state below and comment on.

Secret Talks Between Gaddafi And The Rebels
Libya has insisted that it is in talks with rebels, despite the rebels' denials. Certainly, something is happening behind-the-scene that will either shock NATO and make nonsense of its choice of option to resolve the crisis or suggest that the two factions responsible for the crisis are themselves more interested in seeing the crisis as a purely Libyan one to be solved by none other but Libyans themselves.

Loss of Revenue
Most of Libya's oil installations are in the rebel-held east but much of the infrastructure has been damaged by war. With this disruption in oil production and sale, neither the rebels nor the Gaddafi government can rake in any revenue to sustain the fight. The need to compromise on how to resolve the crisis without the military option is becoming a political imperative by the day.

Financial Problems Facing the Rebel Leadership
The rebels also say their administration is running out of cash as donors' pledges have not materialized.

“All of these people we talk to, all of these countries, at all these conferences, with their great grand speeches—we appreciate [them] from the political side, but in terms of finances they are a complete failure,” the rebels' top oil official, Ali Tarhouni told Reuters news agency. “Our people are dying.”

The rebels must by now be having a rude awakening that those backing them are more interested in empty rhetoric than giving them the material support they need to actualize their dream of removing Gaddafi from office and installing themselves in his place. They must now be waking up to the real intentions of those orchestrating the prolonged devastation of their country.

On Friday, Libyan Prime Minister al-Baghdadi al-Mahmudi said NATO was using a “new level of aggression”—deliberately hitting civilian buildings, even as NATO accuses Gaddafi of using civilians as human shields. Libya regards this form of aggression as “a crime against humanity,” which NATO has denied but which won't persuade those who object to its presence in Libya.

Obama's Problems Over the War Powers Resolution
Meanwhile, the New York Times has reported that US President Barack Obama overruled the advice of administration lawyers in deciding the US could continue participating in the Libya conflict without congressional authorization. Obama may be out there on the golf course today, interacting with the Republican Speaker of the House; but I don't think the clouds darkening his political horizon over his handling of the US' involvement in the Libyan crisis will disappear soon.

The Reality of the Libyan Situation
The Libyan crisis is not a problem that should have defied solution to this extent had the West not rashly taken sides to deepen it to the point of no return.

I have all along insisted that by launching this military campaign, the political leaders of the US, Britain, France (NATO, generally) have spun that crisis out of control. As the situation has unfolded so far, nothing but total devastation will be the result of the NATO aggression. But their solution in the form of devastation won't be the answer to the problem. It will only be the genesis for other problems.

Can't anybody see anything beyond his nose to realize that violence does nothing but begets violence? Even if Gaddafi is assassinated or forced out of Libya, the crisis won't be over because of the fundamental understanding that his successors (the rebel leadership, if their ongoing insurrection succeeds) would have entered office through violence. That moment will be the genesis of another crisis, which will hurt Libya more than the so-called problems that Gaddafi is being held culpable for.

The Libyan crisis is a political problem that can be solved by only political and diplomatic means, not a military campaign. It is not a military problem for which NATO should be expending its resources attempting to solve. The logic is simple; military problems are solved militarily and political problems solved politically and diplomatically. Anything short of this strategy will worsen the situation, which is what we've seen happening in Libya.

But those who hate Gaddafi won't see things that way. They see him as THE problem and are targeting him as if removing him from office will balance the equation. It won't, I daresay. That's been the nub of my arguments all this while.

The overarching question is: Why are the pro-Gaddafi forces still fighting despite all the NATO bombings and the certainty of their being killed—as they know and have seen their compatriots killed in the NATO bombardment in Misrata, Bregga, and other areas? They are still pressing on in the face of this danger. What could be motivating them if not their dogged determination not to yield grounds to the rebels whom they consider as threats to their country?

These fighters know the extent of danger to which they've been exposed—supply links being cut off and exposure of their columns to airstrikes by low-flying NATO jets and attack helicopters—but they are not deterred in their mission to defend their territories. These are soldiers fighting to keep the Gaddafi cause alive, regardless of the price they have to pay.

The Libyan military campaign dubbed as” Operation Odyssey Dawn/Unified Protector” by the warmongers is indeed a test for the politically immature leaders of the US, Britain, and France who have stuck to only the military option as the solution. It won't solve that problem and any further commitment that they make will only end up being their curse.

They can learn from a cunning Italian Prime Minister Berlusconi who is politically savvy enough to know how not to play any frontline role by pushing his country into this wild goose chase in the Saharan Desert. Italy has contributed only minimal help, not only because of its being haunted by the memories of its defeat by Libya in the heat of colonization, but also because it may not want to see the military campaign alone as the solution to the Libyan crisis.

The West's choice of solution is indeed the main cause of the prolonging of this political problem in Libya, which is spinning out of control for nothing. NATO's persistent devastation of Tripoli only confirms the stalemate situation that the war has reached.

As the NATO bombings continue and the fighting between the rebels and the pro-Gaddafi forces drags on from another angle, we will keep our eyes and ears open to follow the trend.