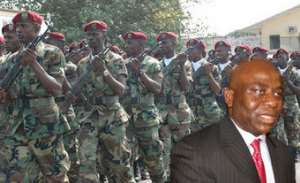 A string of documents surfaced in the public domain from the General Auditing Commission has recommended for prosecution Liberia's Defence Minister Brownie Samukai, the Manager of a rice supplying firm and others in connection with a fraudulent transaction.

Minister Samukai was indicted by the General Auditing Commission (GAC) in a two hundred and eighty-two thousand United States dollars (US$282, 000.00) transaction involving the Defence Minister and the Supplying West Africa Traders (SWAT).

SWAT is a business firm located on the Bushrod Island and involved in the sales and supply of rice in Liberia.

In a letter addressed to Justice Minister Cllr. Christiana Tah, Liberia's Chief Prosecutor, the GAC revealed how Minister Samukai and SWAT are involved in a criminal syndicate in a deal meant to supply bags of rice to soldiers at the Edward Beyan Kessely Military barracks at Camp Schiefflin in Margibi County and Camp Tubman Military barracks in Gbarnga, Bong County.

The GAC's letter to the Justice minister reads: “By this letter, I bring to your attention for legal action an irregular transaction involving the processing and payment of a voucher from the Ministry of Defense to Supplying West Africa Traders Incorporated (SWAT) in the amount of US$282, 000.00”.

In detailing the transaction to Minister Tah, the GAC noted, “The Ministry of Defense entered into a contract with SWAT for the supply of 18, 800 bags of rice and for the benefit of the soldiers at the Edward Binyah Kesseley Barrack in Schieffin and Camp Tubman Military Barrack in Gbarnga, Bong County. The total contract value is US$564,000.00”.

Detailing the transaction, the GAC narrated, “The first payment of the contract was made in December 2010 and did not undergo review process by the Physical Audit Unit at the Ministry of Finance, as there was no physical audit report made on the delivery of the rice to the Ministry of Defence”.

'Fictitious Delivery'
The letter continued: “On 1 March 2011, GAC auditors at the Ministry of Finance received a disbursement voucher (DV) # MOD-011-2-15-ASU-6064 in the amount of US$282, 000.00 processed by the Ministry of Defence in favor of SWAT for the second payment of 9, 400 bags of rice for the benefit of the soldiers. The voucher was accompanied by purchase and sale contract, invoices and delivery note as evidence that the 9, 400 bags of rice were delivered to the Ministry of Defence for which payment was being applied”.

With the observations, the GAC through its Deputy Auditor General Winsley S. Nanka (CPA) noted that “Because of the concerns reported about the legitimacy of the rice deals, the legal Department Director and Executive Director of Audit Service of the GAC visited SWAT on Bushrod Island, for the purposes of verifying some facts pertaining to the entire rice transaction and the delivery note issued by SWAT. However, my Auditor and the Legal Director did not get cooperation from the Businessman because they were told that the businessman in charge of the company should not speak to anyone from the General Auditing Commission”.

'Prosecution recommendation'
In emphasizing the analysis and conclusion of the audit to Minister Tah in a letter dated 4 April 2011, the General Auditing Commission through its Deputy Auditor General Winsley insisted that “The conduct of the businessman, the Minister of Defense, Brownie Samukai, Jr. and others at the Defense Ministry amounted to fraud or default”.

The Liberian Supreme Auditing Commission feared, “If the irregular acts observed had not been detected by the GAC auditors, the Government of Liberia would have incurred substantial loss on the transaction”.

Given the magnitude of the criminal syndicate, the GAC sounded more robust in its concluding letter to Minister Tah emphasizing that Minister Samukai and his alleged partners in crime must be brought to book.

“In view of this, we request that you [Justice Minister Christian Tah] consider the evidence presented and prosecute the General Manager of SWAT, the Minister of Defence and others who consummated the transaction”, concluded the letter by Deputy Auditor General, Winsley Nanka.

'Show of disrespect'
The prosecution recommendation by the GAC against Minister Samukai and others is a result of a series of investigative audit and a communication written to Minister Samukai on March 8, 2011.

The GAC had drawn Minister Samukai's attention to what it called “a show of insolence by a Lebanese businessman claiming to be claiming on his [Samukai] orders”.

It said: “Honourable Samukai, we visited the SWAT Business Center in the Clara Town Community a suburb of Monrovia to ascertain some facts concerning delivery notes issued by SWAT Business to the Ministry of National Defence in relations to rice allegedly supplied to the Armed Forces of Liberia and to also verify the recipients but were told by the man identified as the one in charge that he will not speak to anyone from the General Auditing Commission because you had said to him not to do so”.

The GAC protested the alleged orders of Minister Samukai reminding him through the letter signed by its Legal Service Director and ATTORNEY-AT-LAW Cornelius Flomo Wennah that “Let me hasten to bring to your attention that the Executive Law of 1972 in Section 3.3 paragraph (b) among other things give the Auditor General the authority to perform audits of all property accounts and transactions of all government agencies and organizations and that such audits shall be conducted as far as practicable at the place or places where the property and records are located”.

In informing Minister Samukai of the authority of the GAC to audit, the GAC sounded a caveat to him to comply with its audit as it is legally mandated to audit all transactions involving government and there is no exemption to anyone or any Ministry like the Defence Ministry which is being run by Minister Samukai.

“In of the forgoing, we ask that you kindly use your good offices to prevail on the management of SWAT to cooperate with the General Auditing Commission by coming to our offices by or before Thursday March 10, 2011 at 3:00pm to have us gather information on the delivery notes as well as carry out investigation on the recipients or leave use with no alternative but to have the management of SWAT forwarded to the Ministry of Justice for appropriate action”.

The General Auditing Communication informed Minister Samukai that all communications between it and him as it relates to the fraudulent rice transaction are being communicated to the Ministry of Finance. This it stressed was to “request a halt to all payments to SWAT pending compliance”.

The March 8, 2011 letter by the GAC has now been followed by the recommendation for the prosecution of Minister Samukai and his partners in crime with the Justice Ministry through Minister Tah given the evidence to institute and proceed with the prosecution.

'Previous questionable deals'
Minister Samukai is a strong ally of President Sirleaf who has on several occasions served as Acting President or chair of government in the absence of the President.

He has in the past been linked to dubious transactions involving the awarding of contract values over thousands and thousands of US$ to some GSM companies as part of the rental of the New Defence Ministry building where the cell-phone companies' are stationing their transmittal towers.

The situation led to the summon of Minister Samukai by the House of Representatives where he refused to discuss the contract in public because of what he considered 'national security' implication. At the time, the Minister insisted that he could not divulged sensitive security information as it relates to the contract to the House in public unless he was authorized by the Commander-In-Chief of the Armed Forces of Liberia, President Ellen Johnson-Sirleaf. With his insistence, Minister Samukai and members of the House went into a closed-door session and no detail emerged over the dubious contract with the cell-phone companies, the Minister was left off-the-hook.

Also, during the course of last year, the Defence Ministry came under series of strong criticisms after AFL soldiers at the Edward Binyah Kessely Military Barracks at Schiefflin complained of extreme hunger due to the lack of food supply and thus they were forced to fetch for plumbs as their daily meal.

The reports at the time sparked widespread condemnation but Minister Samukai rejected such, insisting the desire of the soldiers to eat plums was not because of hunger but human nature.

In the wake of the string of documents linking Minister Samukai and some individuals at the Defence Ministry along with a businessman to a fraudulent business deal, it remains to be seen what action the Justice Ministry will institute as the GAC through its Deputy Auditor General Winsley Nanka has forwarded Minister Samukai and his alleged partners in crime for prosecution.

The Justice Ministry it must be noted has in the past received several audit reports from the General Auditing Commission but in most instances no practical action has been taken to prosecute individuals indicted by the GAC for fraud, waste and abuse. This has made many sceptics to lament the government's lack of political will to bring to book individuals who misapplied, abused and misused state resources without the benefit of hundreds of thousands of poverty stricken. It has also led to question over President Ellen Johnson-Sirleaf's professed war on corruption which she declared public enemy # 1. Many like Human Rights Activist Aloysius Toe believe 'corruption is public friend # 1 to President Sirleaf and her government.