RE-AYARIGA: NPP SYMPATHISERS HAD TO GO FOR OTHERS TO BENEFIT 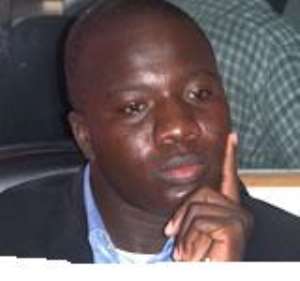 On the 9th November, 2009, the government of President Mills through his Spokesperson Mahama Ayariga confirmed in an interview with joyfm that, persons perceived to be sympathisers of the New Patriotic Party (NPP) are being sacked from their jobs because, it is the policy of the NDC party to sack them in other to replace them with sympathisers of the National Democratic Congress (NDC).

This is the most unfortunate statement I have ever heard in the whole of my existence on this earth!! It is also a clear example of what the motive of the government of President Mills is all about. Infact 9/11/09 was a sad day for Ghana. It was the day that Ghanaians numbering up to over 49percent of the total number of registered voters who did not vote for the NDC in the 2008 elections and are perceived to be sympathisers of the NPP were told that, they will never be employed under the government of the NDC and more so those of them who have not as yet given the sack should ready themselves for that.

This is excessively disappointing for a number of reasons and I honestly wish my friend Ayariga will in the coming days say he was “misquoted” by the media, even though his voice is on tape.

Firstly President Mills, then Candidate Mills promised to create jobs for all Ghanaians; not only NDC Ghanaians. The question to ask now is that, what happened to that promise within the ten months that he has being in government?

Secondly, President Mills must be reminded that, resources of the country including jobs are for the estimated population of nearly 25million Ghanaians and not just for sympathisers and fanatics of the NDC.

Thirdly, any donor support towards the creation of employment in the country is usually given to Ghana not President Mills and his NDC. Is the government of the NDC aware of the effects such a statement will have on Ghana? Or it is just another PR disaster?

I am now convince that, President Mills's daily anthem of being a father to all Ghanaians is a huge hoax and he should therefore with immediate effect withdraw the father of all cliché from his dictionary and replace it with father of NDC fanatics!

There is the urgent need for Ayariga to once again come on air to tell those Ghanaians who are not sympathetic of the NDC; where they should go as they are routinely dismissed from their jobs in Ghana? Maybe they want them to turn to armed robbery or prostitution.

A very bad precedence is being set in the country. If the NDC should continue sacking perceived sympathisers of the NPP from their jobs and even never takes into consideration whether they were in the first place qualified for those jobs, then what it means is that, the country has become lawless and what I will term unsafe to live in. what this means is that, the government of President Mills can not safeguard the employment rights of Ghanaians especially their rights to do jobs that they are fully qualified to do.

The government of President Mills must be asked; what sacking of perceived NPP supporters from their jobs and replacing them with NDC fanatics is? If it is not nepotism they should tell us what it is? Is it not a paradox that, the very nepotism that the NDC is accusing the NPP of is what they are practicing earnestly?

If these trend is allowed to go on what it means is that, even if the NDC is to rule Ghana up to 2090, its sympathisers will also be sacked from their jobs any time the NPP comes back to power. When things are allowed to get to that stage, not only will it further divide the country, but also Ghana would become permanently polarised in generations yet to come which is not anything good for anybody to be proud of.

I must say I am endlessly disappointed that, President Mills and his government are unaware that, one would have to be a Ghanaian first, before you become a member or sympathiser of any political party? My view is that, who works where should be dependent on qualifications and other capabilities rather than on political considerations or expediency

While condemning the government of President Mills for openly sentencing its perceived opponents to unemployment firing squared, I also wish to call on objective, not subjective human rights activists and other civil society organisations to call President Mills and his government to order.

The Diplomatic community whose countries usually support the country in various forms must have a meeting with President Mills to call him to order. He must be told that, his illegal policy of sacking perceived opponents from their jobs is not done even in criminal military regimes.