There shall be no “Piece Pipe” for Rawlings. 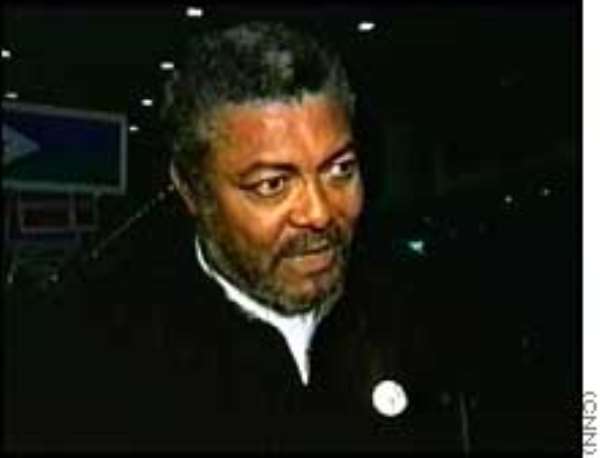 “Therefore shall Rawlings seek for Piece and there shall be no Piece”. “He can run but he can't hide from Justice”. For his iniquities, his hands are stained with blood and his fingers with quilt. His mouth has spoken lies, and his tongue mutters wicked things. J.J. Rawlings conceived iniquity in 1979 and give birth to evil. This we can all recollect from his coming. He hatched the eggs of vipers and spinned a spiders´s web. He is like a wounded lion in his den. The resent information indicating the refusal of State Protocol by J.J. Rwalings and Professor Mills is a testimony of men without cause for unity and understanding. They are reacting to evil commands and not the interest of smoking the “Piece Pipe” with the nation. Their thoughts are wicked. As Mr. Kwabena Agyepong on the 1st of January 2003, clearly said this; “Christmas is a season of goodwill and therefore, the former leader should have accepted the drinks in the spirit of the season and its values. He described as unfortunate and disappointing, the rejection of a well-intended offer by the former president from the office he once occupied. Mr. Agyepong said since President J. A. Kufuor assumed office, it has been his avowed aim to foster unity, harmony and peace in the country.

He said the President believes that political opponents are not enemies and that the beauty of the current democratic dispensation is the celebration of diversity in the national body politics. “It is in view of those values that President Kufuor invited the leadership of the Minority and Majority in Parliament to the Castle for an interaction to send clear signals that leaders in the different political parties are not at war,” he said.

The presidential spokesman said it is suprising that former vice-president and NDC flagbearer, Prof Atta Mills should decline a generous and well-meaning offer, especially during the occasion of Christmas and at the time there is the need to send signals to underscore the importance of national cohesion and harmony.

“The behaviour of the former leaders poisons the peace of the Christmas season,” he said. Mr Agyepong said it is the conviction of President Kufuor that as a nation there is the need to forge a new era devoid of hatred, rancour and bitterness, he added.

My fellow countrymen, I think in view of J.J. Rawlings, the second Hitler in Ghana, he regards every opponent as an enemy. This is a true testimony of such a selfish acclaimed leader who ruled a country for 20 years with impunity and humiliation. Is Rawlings a gentleman to understands these values of democracy and the goodwill of Ghanaians? His acts are like a greedy dog that cannot have enough. There is nothing that will please him. The only thing that will please such a person is to „Hand Over Power” to him to rule the poor Ghanaians for the rest of his life because in Ghana, there is no single intelligent human being like him.

Therefore, no amount of “Gold nor Silver” will be enough for him. I think President Kufuor should have known his taste before sending these drinks which he Rawlings, have in abundance at home, because he has been with him in his former regime and he Kufuor knows why he left his cabinet. He should know that he is thirsty of the „Blood” of our poor and helpless Ghanaians. That is what he perhaps needs, but not “whisky on rocks”. Let Kufuor give him the whole Obuase Gold mines and see if he will accept it as Ghanaians goodwill. How can we Ghanaians smoke the “Peace Pipe” with such disgruntle people?

The State Protocol should have sent him the whole country on a “Silver Platter” instead of other assorted drinks which he hates. “Hatred” is said to be a chronic disease within the body of a man that takes several decades to destroy the soul, for ye shall never be free from sorrows”. J.J. Rawlings is unhappy to see how helpless he was, to see his own “Boy” John Agyekum Kufuor took over power from him. He was bitter, and could´nt believe his eyes. How dare do you go and offer him something to drink after your success? Is it possible to smoke the “Peace Pipe” with your master who has nothing but “hatred in his heart?. I pray that he Rawlings, will repent from his iniquities and be ever ready to pay for the price.

My fellow countrymen, it is about time for all of you to realise the motive of the sort of so-called Ghanaian we have in our history. I hope Professor Atta Mills will be intelligent enough one day to depart from a man who's fingers are defiled with blood and join any other political group. I hope Prof. Mills is not taking this appointment because of money or prestige.

The days of J.J. Rwalings are counted in our history, and for fear of justice, he has no other remedy rather than playing with his political arrogance and creating confusions. He thought that Ghanaians are “forgetful” people. I can assure him that no matter how long it takes Ghanaians will let him and his henchmen pay for their iniquities. “They can run, but they can't hide”. Justice will prevail forever. God bless Ghana. Prince Aidoo (Evangelist) Ghana Social Democrats Germany