2020 Elections: Enough lessons for both NPP and NDC 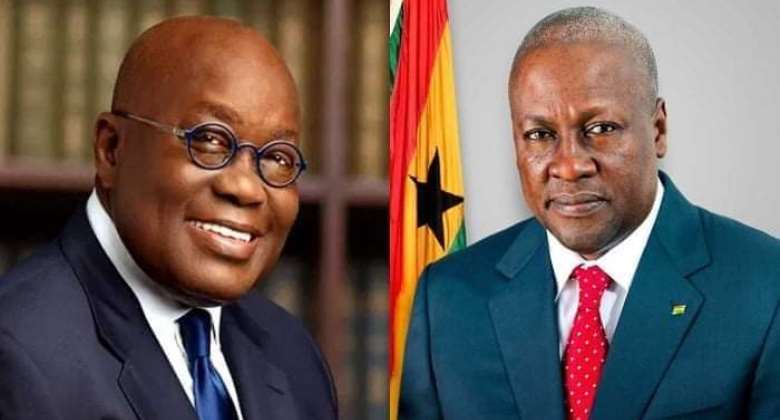 If the 2020 elections proved anything, it is that Ghanaian electorates have become much more sophisticated and discerning than previously thought. They now understand that the politicians do not listen to their complaints, therefore, they do not complain much, they give you feedback with their votes. By that time, however, it will be too late to do much.

I will try in this article to perform a diagnosis of what went wrong for both the National Democratic Congress (NDC) and the New Patriotic Party (NPP) in the 2020 elections and proffer some recommendations.

Let's start with the NDC followed by the NPP.
What has the NDC done wrong and what should they do to right their wrongs going into 2024?

In my humble opinion, the NDC shot itself in the foot. It did not attach the needed seriousness to this election. The party’s campaign was uninspiring, boring and without direction. The Party additionally overworked its Presidential candidate - former President John Dramani Mahama.

In fact, the former President who became the head, body and tail of the campaign, at a point exhibited signs of extreme fatigue. He easily got angry even with his supporters who were cheering him on. It looked as though the NDC as a party set him up to fail. He received little or no support on the campaign trail. Those who have the capacity of helping his campaign practically folded their arms. His running mate, Prof. Jane Naana Opoku Agyemang met empty streets on her campaign tours. A sign of inadequate grounds preparation prior to her visits.

Whereas the NPP threw every arsenal it could possibly marshal at the election, the NDC behaved as if there was nothing at stake.

Indeed, I will not be wrong to say that the number of votes and seats the NDC got at the polls shocked most of the party members. They did not expect to win some of the Parliamentary seats they have now comfortably won. However, the moment, albeit, too late, the party realized the possibility of wringing out the Parliamentary majority from the NPP, it started to unfortunately call its supporters to the streets.

Equally, I do not think, frankly, the NDC learnt any lessons from its poor 2016 election results collation process. It is clear the party does not readily have the numbers to back most of its claims. This is evident in the inconsistency regarding the number of seats the Executives and former President Mahama claim to have won, falling between 146 to 139. Whereas from the 8th NPP started updating its support base and Ghanaians with the votes it obtained based on the Polling Stations declared results, up to now nobody knows how many votes NDC got based on its independently collated results. This is very unfortunate.

Going forward, the party must invest in a state of the art Elections Management System (EMS) to save it from further headache in the election results collation process.

The National Organiser, Joshua Akamba was a baggage; the party chairman, Ofosu Ampofo was uninspiring; the National Women’s Organiser, Hannah Bissiw, aside her lack of organizational abilities, went into the 2020 elections with a divided attention – contesting as a Parliamentary candidate, at the same time organizing the women at the party’s base. This is unacceptable for a party in opposition. The National Youth Organiser, George Opare Addo did his best, unfortunately, he did not have the personae to rouse the youth of the party.

I know for sure former President Mahama will contest again in 2024. He remains the choice of the party’s base. Aside, there is no better alternative to his candidature. Therefore, if he is to make any meaningful progress, he needs a new crop of leadership at the National Executives level. He will also need all capable hands on deck. The 2024 campaign must have at least four focal points, including the party’s Parliamentary candidates, if victory is to be assured.

Most importantly, how the former President conducts himself, now into the future will determine his chances of getting back into the Jubilee House.

As I said at the beginning, our democracy has developed to the level that Ghanaians are now discerning; the electorates have become much more refined and can easily read between the lines.

What has the NPP done wrong and what should they do to right their wrongs going into 2024?

For the Governing NPP, I know by now they have learnt a bitter lesson. The message from the electorate is clear; Parliamentarians cannot ride on the achievement of the President to further their ambition.

Except for some few constituencies, the NPP MPs are partly to blame for the party‘s relative poor showing at the polls. The near hung Parliament, after a near two-thirds majority just four years ago, speaks clearly of the level of complacency of the NPP MPs.

It is further clear that most of the NPP Parliamentary candidates who lost their seats were not popular with the electorates. Therefore, the delegate system allowed them to buy their way through the Primaries, using Constituency and Regional Executives whose loyalty is to money rather than the party. Fomena is a case in point.

The NPP must, therefore, reassess its internal election processes. In doing so, the party must jettison its Delegate System of internal elections. Accordingly, the NPP must without delay amend its constitution to allow all card-bearing members to take part in all internal elections – from that of the Flagbearer, through to Party Executives and most importantly, Parliamentary candidates.

Although every President running for a second term in the fourth republic experienced a reduction in his performance at the polls, the votes obtained by the party in the Greater Accra region is an indication that the party must do everything possible to rid itself of the corruption perception. This is the party that came to power on the back of incorruptibility. It is, therefore, unacceptable to allow the perception of the canker to continue to fester.

Equally, Civil Society Organisations are very important in our governance process, the government must for that reason meet them half way on issues of policy and programmes.

Most significantly, if the NPP intends to remain in power, it must never abandon the numerous dams, factories, warehouses, roads and water projects it started.

While at it, the Free Senior High School, National Health Insurance Scheme (NHIS) and the other social intervention programmes must be strengthened. They must never be allowed to run into financial difficulties. These are the policies that knows no NDC or NPP. It benefits all without exception. The NPP government must also fulfill its last minute promises to the first batch of Free SHS students entering our Tertiary institutions.

Furthermore, profligacy, must give way to moderation. Ghanaians hate waste and ostentatious lifestyle, especially, by the people entrusted with the country’s taxes.

In the same vein, the President must drastically reduce his number of Ministers. They are just too many. Ghanaians are not enthused about their number.

Again, the NPP’s internal elections must be handled in a way that will not leave anyone behind.

Finally, the party must not forget that Bawumia remains the people’s choice going into 2024. Hence, any choice other than Bawumia will lead to disastrous consequences for the party.