Junior Jesus: Did he save anyone? 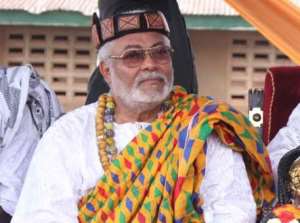 Ghana is confronting the passing of a second President of the fourth republic. This of course is happening at a very crucial time, during a worldwide pandemic with rising cases of coronavirus and an impending election, which is being heavily contested.

Flt. Lt. Rawlings has always been a polarizing figure in the recent history of the country. He is either totally despised or the subject of an almost cult-like worship by citizens of the country. Few people would be indifferent about him.

He was quite charismatic, intelligent, controversial, flamboyant, impulsive and at times humorous and unexpectedly sober and reflective. Indeed, mercurial.

His rose to prominence impulsively on May 15, 1979 in a poorly organized putsch to overthrow a dying military regime. The Supreme Military Council had grossly mismanaged the economy under General Acheampong who had been overthrown in the palace coup. General Akuffo his successor, under great pressure from resistance to military rule, which had begun in earnest in 1974, led by students of the three major universities and later included workers, market women, trade unions and the conveniently assembled Association of Professional Bodies, had the country already on a path to constitutional rule. Political parties had been formed and campaigning was on in earnest when Mr. Rawlings appeared on the scene.

The tribunal he faced upon his arrest, provided him an opportunity to speak publicly about his motivations. Most of his grievances were about adverse changes in the military and of course, widespread corruption in the outgoing military regime.

He was sprung out of jail by his colleagues on June 4, 1979 and the outgoing SMC (II) government was overthrown. The Armed Forces Revolutionary Council (AFRC) was born and its mission under his leadership was to clean house. The leaders of the SMC government were executed by firing squad and thrown into the mix was General Afrifa who was a member of the first military regime of the National Liberation Council (NLC) and a former head of state.

This was a seminal event in Ghanaian history because at no time had any military coup resulted in the execution a head of state, let alone three. Mr. Rawlings was to say in later years that this intervention was necessary to prevent an even wider scale of chaos and death. It is however difficult to verify such a prospective proposition.

Many of those executed were essentially killed because of influence peddling and for “ethnic balance”. That is, they were said to have used their positions to apply for loans, which in retrospect pales against the high levels of corruption and the enrichment of public officials that occurred in the years ahead under Mr. Rawlings’s leadership of the country.

After the “house cleaning” government of the AFRC, Dr. Limann’s Peoples National Party (PNP) won the national election convincingly and formed the first and only government of the 3rd Republic. During the 27 months of this government, Mr. Rawlings who had very reluctantly handed over power to the democratically elected leader, was implicated in no less than six attempts to overthrow this new government.

He finally succeeded on December 31, 1981 in infiltrating and controlling the security apparatus of the country sufficiently to overthrow Dr. Limann‘s government. This was described as the December 31 revolution. The country was at peace and if the revolution was the transform the social order, then the years ahead would indicate that Mr. Rawlings failed on many fronts. It is worthy to note that not a single person in the Limann government was arrested and tried for any offence. Why was there only one President in the 3rd Republic?

This coup d’état ushered in Mr. Rawlings’s Provisional National Defence Council (PNDC). He was to govern the country with the PNDC right through to 1992, when the cumulative results of significant human rights violations in the country forced a constituent assembly leading to the return to civilian rule. Mr. Rawlings is often referred to as the father of modern democracy in Ghana. That would be a rather superficial characterization because he was a very reluctant democrat but having secured a large base of support in the country, was prepared to throw his hat into the ring to become a civilian leader. If there was a time ever in modern Ghanaian history where citizens had to “resist oppressor’s rule”, it would be during the period of the PNDC government. It was the most repressive of the three military governments we have endured.

The erosion of human rights in Ghana during this period included at its height, the murder of three judges and one retired military officer, clearly at the hands of PNDC operatives. As usual, Mr. Rawlings was aware of the operation but could not be shown to have given a direct order to kill anyone. This is like his explanation for having included General Afrifa from a distant government in the lineup of senior military officers who were executed in 1979. Here too, Mr. Rawlings says an unnamed senior officer in the army that he respected greatly, insisted that “the rogue” General Afrifa should be included in the list of those to be executed. However, Mr. Rawlings was in charge and bears ultimate responsibility for all these deaths.

The PNDC period was marked by an atmosphere of being governed by a highly militarized single party government. Many people were summarily assessed for alleged violations, publicly shamed, dehumanized and killed during this period. Many ordinary successful small and big business people were robbed of their lives' work and properties by government apparatchiks. Many of the unsung, were not as well-known as the judges and the retired military officer, so their deaths and disappearances were quietly suffered by their families and friends with no avenue for redress.

Meanwhile, the 234 state enterprises in Ghana 1984 had steadily been divested or sold off to PNDC/NDC connected individuals and organizations at giveaway prices over the next 10 years, effectively entrenching crony capitalism on the domestic landscape and destroying local entrepreneurship, which started with the seizure of Mr. Siaw’s Tata Brewery during the “house cleaning” exercise of JJ’s first coming.

For these and many other reasons, Ghanaians began to press for a return to constitutional rule which had been interrupted by Mr. Rawlings at the end of 1981. There were attempts to credit Mr. Rawlings for his 11 years of service and allow him to run for one term, if elected as a civilian president under the constitution of the 4th Republic. He insisted that if he were to run, he would be entitled to two terms of office if the electorate determined so. He took his chances, the soldier that he was, and was indeed elected to two terms as the first President of the Fourth Republic.

Even with the constraints of constitutional rule, it was never entirely easy to contain Mr. Rawlings. He however continued to gain in popularity around the continent as an up-and-coming Pan-Africanist and one of the hallmarks of his tenure as president was the rehabilitation of the image of the founding president of the Republic of Ghana, Dr. Kwame Nkrumah.

He began to enjoy the benefits of being regarded as a legitimate leader of the country internationally. His more enduring legacies politically, included infrastructure development, rural electrification, local government reforms and the projection of a strong national identity not seen since the days of Kwame Nkrumah. However, decisions made, including submitting to structural adjustment by the IMF, have continued to drive Ghana’s economy along a neocolonial path.

His personality loomed large over the country long after he left office, as he continued to be tempestously active in the NDC, the party that he founded. Succeeding presidents, both from his party and from the opposing NPP had to find ways of restraining him from his unseemly and impulsive interference in their administrations.

Naturally, his family and supporters will be in grief, others will also be relieved that he is not around to remind them constantly of their pain and many will remain unsure of whether he was an asset to this country or in many ways the source of many of our continued problems. These include a chronically wounded economy, continued youth unemployment, a mediocritized education system, an increasingly politicized public service and the death of social order.

He railed against and dismantled an existing social order but was never quite able to build a new and better system to replace it in the 19 years that he was in power both as a military ruler and as a civilian president.

Mr. Rawlings’s legacy, quite simply is a very mixed one. Like every human being who dies before what appears to be his time, he leaves behind many unfinished dreams. We of course wish for the gentle repose of his soul and can understand and empathize with his widow and children as human beings. Many were not able to mourn their trauma and loss in his time as a leader.

Public figures like Mr. Rawlings are memorialized by how their actions have impacted the lives of thousands and millions, positively or negatively.

While remember his successes, we must not for the sake of propriety ignore his errors, so they become lessons for our nation. We can forgive but we must always remember.

Imagine the Ghana we would be living in, if we were still in the 3rd Republic.

“We understand why children are afraid of darkness ... but why are men afraid of light?” - Plato

He is also Interim Chairman – Progressive Alliance for Ghana (PAG), a movement for social and economic justice in Ghana.