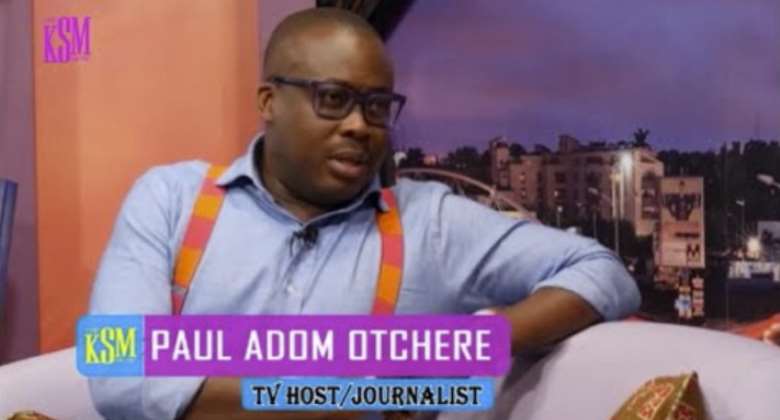 On Friday, the 7th of August, 2020, "ghanaweb.com" published a news item captioned "Adom-Otchere Punches Opoku-Agyemang Over Introductory Speech At Unveiling". It was a catchy headline that must have caught the attention of many Ghanaians. It caught my attention also.

I was completely surprised to find out that all the fuss was about a single statement in the brilliant speech that the Professor made on the occasion of her unveiling.

And what was that statement?

According to "Ghanaweb.com"; "Paul Adom-Otchere says Prof. Naana Jane Opoku-Agyemang’s speech during her introduction by the NDC was intended for “a populist reaction”, “disingenuous” and should not have been made by a professor and former education minister.

To this, the Good Evening Ghana host said: “is false and it undermines the heritage and history of the Ghanaian society”.

“It seeks disingenuously to equalize what everybody did and it is almost certainly a response to unnerve situations that come up with some people when it is said that President Akufo-Addo is over talking about his ancestors; he talks about his father, the big six and JB Danquah,” Adom-Otchere said on Thursday’s edition of Good Evening Ghana", according to the "Ghanaweb" publication.

So far, over one month after the good Professor was outdoored by President John Dramani Mahama as his Running Mate for the December 2020 general elections, Professor Naana Jane Opoku-Agyemang's speech has received excellent reviews for the statesmanly manner in which it was delivered devoid of partisanship and for its excellent content touching on relevant issues of nation-building.

Many in the academia where she was a GIANT of no mean stature in her chosen field of endeavour, having risen to the highest echelon of Vice-Chancellor of the highly respected University of Cape Coast, many of her professional associates have been pouring praises on her for the highly dignified manner she handled herself and the deep thoughts she espoused.

She has since plunged into the gruelling field of practical politicking "winning souls" for the cause of the National Democratic Congress of giving our women and the deprived, opportunities in our society that would lift them up.

Is it not strange that after a whole month of a speech that received such high ratings, Paul Adom-Othere would wake up from his slumber to say that he has found one statement in the Professor's whole speech which was so unfortunate that she should apologise to Ghanaians for it?

And what was contained in Professor Naana Jane Opoku-Agyemang's statement that got Paul and his sponsors up in arms?

Professor Naana Jane Opoku Agyeman has stated that; "....and everyone's ancestor has been a worthy contributor to the space we now call Ghana."

You see Paul, when a Professor makes a well considered statement on a very important occasion as her public outdooring as a Running Mate of a very important political party as the National Democratic Congress, a party which has just come out of government and is on a serious business of getting back into office after 7th December, 2020, you do not just make inconsequential pronouncements on or about it.

The best you should have done, Paul, was to seek audience with the Professor in order to be tutored on the statement which has so confounded you.

You did not, because your sense of reasoning, if any, or judgment, if any, were so beclouded by your personal idiosyncrasies and perverted biases as to force you to make the statement you made.

I was not surprised on reading Paul's statement because the Saturday before, Mr. Kweku Baako also a Social Commentator and a regular panelist on Joyfm's Saturday "Newsfile" discussion programme, displayed on live television, a copy of Professor Naana Jane Opoku-Agyemang's handing over notes she left for President Akufo-Addo's Minister of Education. Mr. Baako said they were looking for materials on her tenure as Minister of Education under President John Dramani Mahama. The Akufo-Addo government and its lackeys are looking for dirt and whatever they can find to dirty the Professor. I wish them well.

People like Paul Adom-Okyere should realise that the opportunity given to them to host such programmes as "Good Evening Ghana" should not become a license to try to run down people who have high laurels in their chosen fiels of endeavour. Such opportunities should not be misappropriated for parochial political ends, as Paul has often times sought to do on "Good Evening Ghana" as was in evidence last Thursday night.

Now dear readers please permit me to school Paul Adom-Othere and his ilks a little bit.

Paul's contention was that some families were, are, or have been more important than others in the political history of Ghana.

Professor Nana Jane Opoku Agyeman's speech was on a political platform, provided her by the NDC, but as has been attested to by many, her speech was non-political as she rose above parochial partisanship to the level of a statesman as the position of Vice President which she would soon occupy deserved.

What is offensive about the statement; “…and everyone’s ancestor has been a worthy contributor to the space we now call Ghana”.

When Tetteh Quarshie first brought just three seeds of cocoa beans from Fernando Po, was he the only person who cultivated all the cocoa in Ghana to enable the crop to become the leading foreign exchange earner and mainstay of the country's economy? Hundreds of thousands of other Ghanaians of all ethnic groups have contributed and continue to grow cocoa and they have become worthy contributors to the wealth of the country occupying the space we now call Ghana.

If you take gold mining into consideration, the mineral which attracted Europeans to our shores, it employs all categories of persons from labourers to engineers to administrators. They all come from different ethnic backgrounds and families and in education, but collectively, they contribute to the creation of wealth for the country. Are they not worthy contributors to the land called Ghana?

In much the same way, teachers, doctors, tailors, masons, architects, engineers, nurses, auto mechanics, drivers, carpenters, housemaids, house boys, night watchmen, soldiers, policemen, immigration officers, mortuary workers, you name them, every single Ghanaian in whatever sphere of endeavour he or she finds himself contributes a quota to the development of our country- Ghana.

Paul's fixation on politicians as was evident in his reference to Mr. Akufo-addo and his family only goes to give him away as narrow-minded in considering politicians as the only group of people who are worthy of recognition as contributing to building our country.

His kind of thinking is most pathetic indeed.

When the Osagyefo, Dr. Kwame Nkrumah declared "positive action", if the downtrodden, common people did not rise up to join him, would "positive action" had made the kind of impact it made on British colonialists to begin to see us in a different light and to set in motion the processes that led to our independence?

When a handful of politicians like Mr. Akufo-addo form political parties if common people whom Paul Adom-Otchere and his ilk do not think or recognize are worthy of recognition do not rise up to prop them up, would they ever succeed to be Presidents and Ministers and District Chief Executives and Parliamentarians and whatever positions they hold in government?

In the enterprise of nation-building, every single citizen high or low is a worthy shareholder and contributor in that endeavour and that was what Professor Naana Jane Opoku Agyeman so eloquently pointed out in her speech and which Paul Adom-Otchere so badly failed to grasp.

People who have the opportunity to use public platforms in their line of work must be circumspect and hasten slowly in their desires to denigrate and condemn others whom they see as opponents, lest they badly expose the ignoramuses that they are.