Akufo-Addo's Corona Handling, Our Money And Our Health 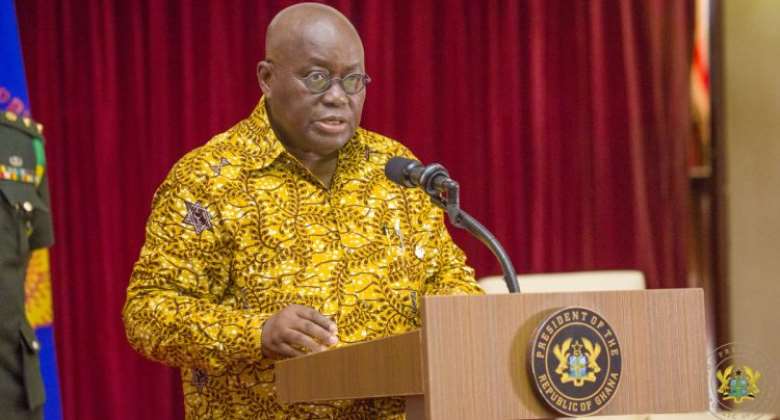 On Sunday, 26th July 2020, President Addo Dankwa Akufo-Addo gave his 14th coronavirus update to the nation, and as usual, he found an opportunity to dabble in politics. This man has failed to provide leadership as a statesman and Head of State of our nation; increasingly he has shown himself as a very partisan president whose overriding preoccupation is to find and create opportunities for self-enrichment and for his family, friends, cronies, former concubines and colleagues.

But that is not my concern or focus on this opinion piece. I shall return to this nation-wrecking theme of self-seeking at another time.

Before the President's 14th update on the coronavirus pandemic, on Thursday, July 23rd, 2020, the President's nephew and personal banker, Finance Minister, Ken Ofori-Atta, one of Akufo-Addo's close family members in his government, presented the mid-year review of this year's budget to Parliament as required by law, revealing a gloomy picture of the country's finances, and showing a collapsed economy with a huge deficit not seen in recent times.

So far as a result of the coronavirus pandemic, Akufo-Addo's government through his cousin Ken Ofori-Atta has borrowed the following amounts of money.

We are told that just in less than two weeks of providing some kind of food - gari "olonka" and three cubes of sugar for a small section of our people in Accra, Tema, Kasoa, Kumasi and its environs, for sections of the population, so poor that they themselves could not feed themselves for two weeks, if they don't go to scratch the ground on a daily basis, the amount spent by Ken Ofori-Atta and his NPP Polling Station Executives, they said was GH¢54,300,000 on the so-called food for the poor and the vulnerable.

And the surprising and pathetic aspect of this whole thievery of the peoples' money was that there was no proper accounting for these expenditures. Now that we have raised these issues of lack of accountability in the use of our corona money, and questioning these fake expenditures, take it from me that in the coming days we shall be slapped with some fictitious account to cover their thievery of the public purse.

But even more pathetic and worrying is the fact that since the arrival of the coronavirus pandemic in Ghana early in March this year, the Akufo-Addo regime has taken actions that have enabled it to take advantage of the disease, apart from the carefree borrowing with careless abandon going on with no regard to fiscal discipline. (I wish the Minority in Parliament succeeds in hauling the Finance Minister before court for disregarding the fiscal responsibility Act.)

The result is that the country's 2020 budget had been thrown into disarray with a free grabbing for their party people that knows no bounds.

Meanwhile, the disease has defied the poor measures taken so far to rein it in and is on rampage infecting an increasing number of Ghanaians on a daily basis.

Of particular note is the very poor testing regime. On 13th August, while putting this article together, I accessed the Ghana Health Service website to source the latest information on the coronavirus pandemic disease. This was what the ministry put on its website in connection with testing results:

The quality of the management of the corona pandemic in the country has left much to be desired in many ways. The testing regime carried out so far has been poor to the extent that samples have been left untested for over a month and then discarded. If samples are not tested how can those infected be efficiently determined, separated, quarantined and treated so that they do not infect people to increase the numbers.

The government seemed happy to let the disease spread and fester as its actions and directives seemed designed to increase infections rather than reducing them.

The first two infections were announced in early March and were said to have been imported into the country by foreigners or persons who had travelled outside the country and had returned bringing the disease onto our shores.

The disease's spread was very slow at first but later decisions taken by the government involving mass registration for citizenship identity card and registration of voters for this year's general elections as well as reopening of schools have led to spikes in infections.

The single highest daily infection of 1,385 occurred on 27th July 2020 at the peak of the voter registration and Ghana card registrations.

So far the following figures were released by the Ghana Health Service on its website on 13th August 2020 :

As if the above were not bad enough, the President during his 14th update on the pandemic after his own 14days of isolation due to exposure to an infected person some two weeks earlier lifted the ban on social/physical distancing in public transport in the country.

It was as though the President was interested in keeping the infection spiking and spreading of the disease so that he could keep restrictions on social gatherings in the country, thus limiting the political activities of his political opponents (or enemies as he liked to call them)

One of the cardinal measures that all healthcare professionals are agreed on as being effective in controlling cross person infection or person to person infection was limiting inter-personal contacts. Nowhere are people in closer contact with each other than in public transport where we are packed tightly together like sardines in a can.

Certainly, the President's lifting of physical distancing in vehicles would go a long way in helping to increase infections of more and more people in the country. Even drivers' mates are complaining about it.

What does the President want to achieve by that directive?

Two weeks earlier, the government had agreed on terms with transport operators in the country and had increased transport fares to satisfy their reduced number of passengers in accordance with physical distancing measures in vehicles.

Taking into consideration that more than a million people move into and out of Accra alone every blessed day, it could be seen that the infection and spread of the coronavirus in Ghana is NOT about to end anytime soon by this singular measure of President Akufo-Addo.

Were President Akufo-Addo and his nephew Ken Ofori-Atta concerned with the spread of the virus and its destructive effects on the people, our economy and its finances, they would have adopted more prudent measures in managing the disease.

This year, 2020, is an election year and by now, in July, the country would have been in the middle of a nationwide frantic political campaign by the major political parties.

Keeping the disease rampaging and keeping the numbers of infections up seemed to be in the best interest of the President Mr. Akufo-Addo and his henchmen in government.

The quieter the political atmosphere the better it is for him because his failures, lies, and deceit would not be exposed.

This might seem rather paradoxical, but that is what the government's actions point to.

For example, the pandemic has enabled the government to undertake certain economic and social interventions which were not on the cards before the pandemic broke. These included:

All these measures have been dictated by a desire to buy the conscience of voters than mitigate real economic difficulties.

If the government were interested in protecting Ghanaians from coronavirus disease, it would have used very small portions of the billions of monies so far borrowed to mitigate transport operators so that they could continue to observe physical distancing measures in their vehicles.

If the government were interested in protecting Ghanaians from coronavirus disease, they would have provided enough personal protection equipment for our doctors, nurses and other healthcare workers to avoid needless deaths.

If the government were interested in protecting Ghanaians from coronavirus disease, adequate quantities of testing chemicals would have been imported to facilitate a vigorous and quicker testing regime so that those tested can know their fates earlier and better treatment provided them.

The December 2020 elections are barely four months away but the coronavirus pandemic shows no signs of abating, due to the government's poor measures. Infections in the of over 500 to 1,000 people daily are now taking place in the country. And with its ability to infect exponentially, Ghana is likely to see more infections with the disease staying longer and wrecking more havoc if the present measures of handling it are not substantially revised.

With over 41,700 people infected (many public health experts dispute these figures saying it is much higher) and still ravaging, Ghana must indeed braze up for harder times ahead as the government sees political advantage in keeping us under corona siege and its actions seen as father Christmas to the people.

In these regards, the government looks more like gangsters extracting the most out of us than helping us out of the destructive effects of the dreaded coronavirus disease.

December 7th, 2020 gives us another chance to make amends by getting rid of this corruption-laden, and selfish, Akufo-Addo government and their collaborators.