Who Allowed The Rezoning Of The Department of Parks And Gardens' Cantonments HQ Land - To Enable The Construction Of Yet Another Accra Office Building? 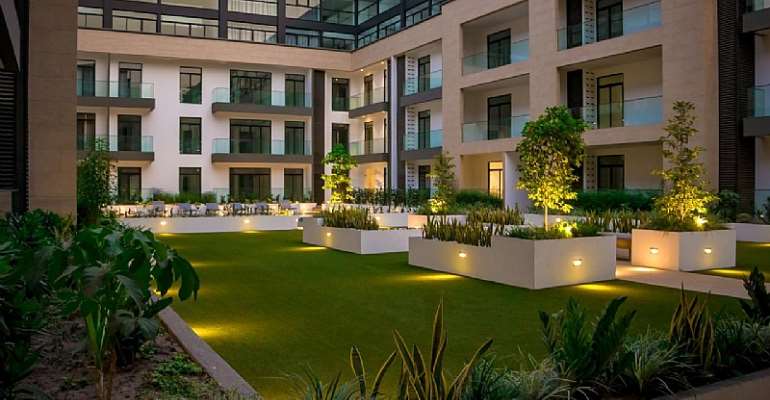 In the COVID-19 era, when what is needed nationwide, are more green arboreal open spaces, to provide oxygen-laden fresh air, to fill our lungs with, and boost our immune systems, too, in a capital city whose air-quality is steadily deteriorating, why has the government of President Akufo-Addo, allowed the Cantonmemts land belonging to the Department of Parks and Gardens to be surreptitiously rezoned from green civic use, to exclusive civic use, to allow its regime-fatcat-cronies to put up up yet another high-rise office building in what is now a concrete jungle with poor air-quality, Ghana's capital city, of Accra?

If we continue to stand aloof - because we are not suffering any of the deprivations most Ghanaians are going through, and most of which can be traced directly to the insider-dealing engaged in by corrupt state officials, and sundry crooked appointees of the President,who invariably disregard conflict-of-interest situations, in order to participate in the asset-stripping of our nation - we will continue seeing abominations, such as the rezoning of the Cantonments land, on which the headquarters building of the Department of Parks and Gardens, was built, to facilitate the construction of yet another high rise office building, in Acrra.

That is why the time has now come for all Ghana's apolitical, patriotic and dedicated Pan-Africanists, who are also discerning individuals, to enter the fray personally, and become active politically, to help turf out the mostly-dishonest and incompetent politicians, who, when in opposition, like to give the false impression to Ghanaians that they will be true servant-leaders, if voted into power, and go on to eradicate corruption in Ghana. Sounds familiar?

Is that not the broken-record-hit-song, which the NPP/NDC duopoly's constituent entities' members, sing in unison, and dance to, whenever in opposition? And, when in power, do they not suddenly grow wings, and become insufferable, and act as if they think they are God's gift to humanity, and the lords-and-masters, of ordinary Ghanaians?

Who would ever have thought that that dreadful example, of the perfidy of our vampire-élites, which the environmental activists in the Eco-Conscious Citizens group, are struggling to halt, by challenging the rezoning of land belonging to the Department of Parks and Gardens, in the Cantonments area, would occur, in a government led by a President Akufo-Addo, I ask?

Finally, the question that all lovers of nature in Ghana must ponder over is: Who are the wealthy and well-connected promoters, who have surreptitiously succeeded in getting all the signatures of highly-placed public servants, needed to enable the Cantonments land, on which the demolished national headquarters building of the Department of Parks and Gardens was located, to be rezoned, from green civic land use, to exclusive civic land use, by the La Dade Kotopon District Assembly's Spatial Planning Committee, and Greater Accra Regional Lands Commission, to enable them build yet another high rise office building in the concrete jungle that is Ghana's capital city, today? Did they bribe their way through officialdom, to achieve the sefish bugger-the-rest-of-Ghanaians, ends they sought? Eeiii, Oman Ghana, eyeasem ooooo - enti yewieye paaa enei? Asem kesie ebeba debi ankasa. Hmmm. Yooooo.