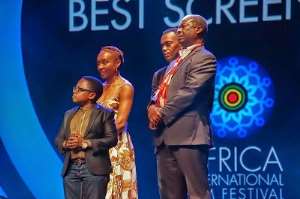 Organisers of the prestigious Africa International Film Festival (AFRIFF), billed to hold in Calabar, Cross Rivers State later in the year, have extended the date for entries of films from African filmmakers. The new date, according to a release made available to us, is now July 24, 2014.

The event, which enters its fourth edition this year, will resonate with film workshops, training programmes and thrills, from November 9th to 16th at the popular Tinapa Business Resort, Calabar, capital of Cross River state.

AFRIFF, according to its Artistic Director, Keith Shiri, “is a platform that seeks to give expression to African cinema by recognising and rewarding excellence in the industry.”

The event, will feature daily film screenings, workshops, master classes, exhibitions, film premieres, glamorous opening and closing ceremonies, and will round off with an award night that will celebrate winning film entries as well as their cast and crew.

Shiri, an advisor for the British Film Institute's London Film Festival (LFF), noted that eligible films must have been produced after January 1, 2013, while preference will be given to films which are yet to be screened globally or in Africa.

According to him, categories for entry will include Feature, Short, Documentary and Animation, with monetary award prizes ranging from $3000 to $6000.

Urging interested filmmakers to ensure that they read the rules and regulations thoroughly before submitting their films for the award segment of the festival, the artistic director disclosed that Short films must be of 40 minutes or less, while Feature length films must exceed 40 minutes.

“For your film to be considered for the 4th Africa International Film Festival, please include a DVD copy of the film, plus a synopsis and/or press kit as soon as possible. You can also send an online screener via dropbox to [email protected] We also require you to complete our entry submission form,” he stated, adding that “guidelines and entry forms can be found on the festival website on www.afriff.com.
am.”
Although the festival started four years ago, it made its debut in Calabar last year with American actress, Lynn Withfield and Nollywood star Rita Dominic as ambassadors of the festival.

Shiri, in a recent interview assured that this year's outing will be more glamorous and resourceful.

'She's not on my level' -Stephanie Okereke's ex-hubby speaks