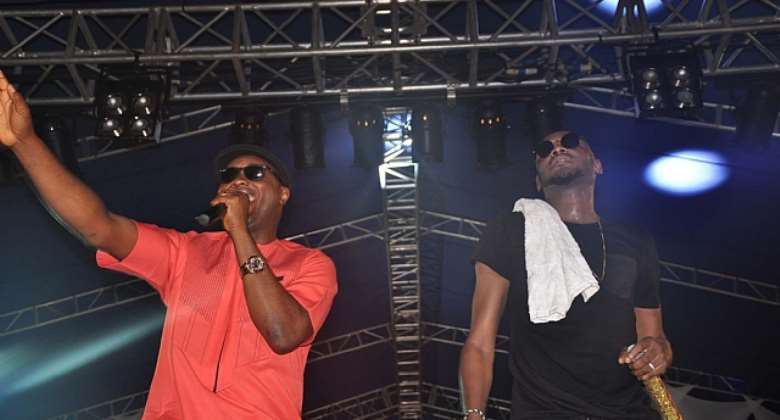 If there were doubts about his status as the African King of Pop, 2-Face quelled them with his phenomenal entrance at the Star Music Trek 2014 stage for the grand finale, which held at Eagles Club Surulere on Saturday May 31st, 2014.

Dressed in shimmery royal regalia with a gold studded crown on his head, 2Face majestically walked onto stage amidst screams of excitement from fans to confirm his status as the king of African pop music.

He began by performing Spiritual Healing, thrilling fans with hit after hit including True Love, Nfana Ibaga, If Love Is A Crime, African Queen amongst others.

Multitalented entertainer turned lawmaker, Hon. Tony One Week joined him on stage to give fans an electrifying Gyration performance. Their duet on Ife Di Nma was well received by fans who sang along during the performance.

He capped the performance at Star Music Trek 2014 with Iheneme to join his wife Annie who was waiting in the wings and cheering excitedly all through his performance.

Latest Photo Reports
Catch up with all the political quotes from our politicians.
Advertise here
More Celebrity Picks
ModernGhana Links
Liya's EP Is Not For Now But You Might like It
Introducing Nissa Seych
Sensational gospel singer, Ese Bliss Biography and Promotional photos
Tiwa Savage on The Zane Lowe Show
Pempe; An awakening of Sisterhood with Seyi Shay.
Meet Abuja Celebrity Photographer, Prince Cyril Ajom
Actress Bianca Ugowanne Thanks Nollywood Producers For Constantly Believing In Her Brand
There Is A Need For Creative People To Venture Into Business---Faithia Williams
Uncovering The Notable Capacity Impact Of Alex Mascot Ikwechegh, Nigeria Politician, Businessman And Philanthropist
TOP STORIES