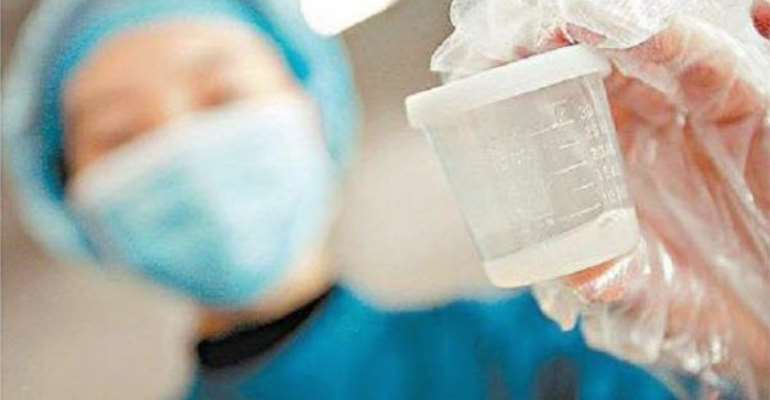 “The People's Hospital of Jiangsu announces: 5000RMB for sperm donation.” On the night of May 16th, this weibo message posted by us caused quite the discussion among netizens. “Famous hospital asks for sperm donation, could this be true?” Facing netizens' skepticism, this reporter visited the provincial hospital to seek confirmation, and the hospital said that the announcement was indeed real.

“The People's Hospital of Jiangsu announced: 5000RMB for sperm donation.” Lasting till 9:12 am on May 18th, this microblog message, posted by the official weibo of ChinaNewsweek has gotten over 700 reposts/forwards. To verify whether or not the announcement was real, as many of the comments doubted, this reporter contacted the phone number given on the announcement. The man who answered the phone claimed that he was an employee of The People's Hospital of Jiangsu's Sperm Bank. He explained that it was a new policy of the hospital to give a 5000RMB allowance to each donor, which wasn't to be paid all at once but in installments that include: a 100RMB transportation fee after the first sperm collection, 3000 RMB more after the “task” is completed, and the rest of the allowance if donor tested to be HIV negative six months later.

Doctor Wang Wei who works at the hospital told the reporter that normally donors have to donate ten times after passing the sperm quality test, blood test and other physical tests, and have to rest for a few days between each visit. As a result, it takes about three months to complete the process of donation.

The reporter visited the Jiangsu province People's Hospital Sperm Bank on May, 17th. Led by a doctor, I entered the “mysterious” Semen Collection Room. The decorations inside were pretty simple. There is an attached bathroom on the left next to the entrance “for personal hygienic purposes”. A couch covered with a white cloth took up most of the space in the room. On the wall facing the couch, there is a relatively “conservative” oil painting of a pretty girl, but there was no sign of the rumored “porn photos” [Note from Fauna: The rumors originate from photographs of sperm banks in other hospitals where there are indeed "sexy photos" on the walls to help the donors]. The doctor told this reporter that an MP5 player is embedded in the wall next to the sofa, and donors can bring USB sticks to play pictures, music or videos that they've prepared for themselves. In the next six months the sperm bank plans to move into the Nanjing Science & Technology University campus, where rooms will be more comfortable and cozy.

Rumor 1: Can lie down and make easy money?

Truth: One can only donate once in a lifetime, and the passing rate is low

Many netizens feel that Sperm Donation is an easy way to make money, literally “making money while lying down”. However, Doctor Wang Wei said, each donor is allowed to donate only once in our country, and his sperm will be used to help five females get pregnant. To avoid repeated donation, the sperm banks check each donor's ID number, and they are planning to build a fingerprint identification system in the future as well.

Wang Wei also told this reporter that 90% of the donors are undergraduate students. Because the standards are much higher for sperm donation than for fertilization, only a few volunteers can pass the physical tests and get the opportunity to actually donate. Men who are already working [out of school] tend to be under greater social pressures and have more bad habits, so the quality of their sperm isn't high. University students, on the other hand, have fewer bad habits and thus often provide higher quality sperm. However, the pass rate even among college students is only about 30%, and among non-students, is less than 20%.

Rumor 2: Any male can donate?

Many netizens regard sperm donation as a job with few requirements, some even think that “any guy can do it”. However, this reporter learned that in the sperm bank, sperm donations may also include some “additional conditions”. “According to relevant legislation, men between 22 and 45 are all allowed to apply for sperm donation, but realistically, it isn't as simple as that.” Wang Wei explained that in Jiangsu Province, donors taller than 1.65m and with at least a diploma are preferred.

“This is to meet the requirements of infertile couples who seek help from the Fertility Center.” “Giving consideration to their future lives, infertile couples might hope that the child has similar physical features as they do, so we take note of donors' blood type, skin color, straight or curly hair, double or single eyelids, and other non-private physical characteristics,” said Wang Wei.

Rumor 3: Would a donor's descendants “fall in love” [result in incest]?

Truth: The chance is next to zero, and the child's legal parents have the responsibility to check history.

“What if my descendants grow up and fall in love with each other?” Donors often hesitate because of this ethical question. As required by hospitals, donors have to sign an agreement and promise to donate at only one sperm bank. It is also required in the agreement that if the child is to get married, their legal parents have the responsibility to inspect whether the father of the child's spouse-to-be has ever donated his sperm and make sure there is no biological relations between them. Documents of donation will be kept for 75 years and be available to look up for 3 generations. “And it is also stated in the agreement that the sperm will not be used for any scientific research purposes, and will be disposed after being used to help five women get pregnant.”

Akufo-Addo, Mahama to wrap-up campaigns with mammoth rallies...
9 minutes ago