Children And Home Accidents, What Parents should know 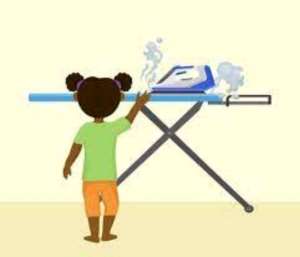 Working in a paediatric unit is a very satisfying experience because it is a great privilege to watch the sick child recover as the days go by.

And when they finally do, the excitement on their faces makes the health worker very fulfilled. While on admission, some of these children run to embrace you when you arrive at work while others become your guards by following you all day till you close your shift.

Sometimes, these priceless children get to know the cars of the health workers who take care of them and always put up the brightest smile like there is no pain in this life when their cars pull up on the compound.

Those that communicate well can have a good conversation with you that can make one forget all the troubles of this world. Oh, Children! How precious and genuine they are.

On many occasions, I have asked myself which branch of the nursing profession would have brought me so much fulfilment than Paediatrics (A branch of medicine that deals with children’s total health from birth through to childhood and adolescence).

I think paediatricians and paediatric nurses are the closest to God in terms of all the specialties in the medical profession because of the role they play in the lives of children. This is an argument I may not win elsewhere but that is my opinion.

On the other hand, it’s a field that can be emotionally draining, horrifying, and devastating.

Watching these innocent children prolong their stay in the hospital due to chronic medical conditions like cancers, and sickle cell disease among others; routine swallowing of bitter tablets, and enduring all these painful injections and procedures can be very heart-breaking.

Most times when death lays its icy hands on these sweet souls, it makes one experience deeply, the pains and vanities of this life.

Also, typical paediatric wards are not free from the screams and emotional reactions from parents as well as loved ones when the news of their children’s death is communicated to them. Oh! How I wish most of the deaths that occur in children can be prevented.

All these were thoughts that ran through my mind during one of my night shifts which began very stable. Any Emergency Room (ER) staff will bear witness that one of our daily prayers is a night free from emergencies, but this hardly happens.

Though paediatric emergencies can happen at any time, we have the impression that most parents are fond of visiting the hospital in the late afternoons and at night.

The shouting from a distraught father carrying his toddler son in his hand, walking barefooted into the ER brought me back from my thinking world. As he run towards me, he shouted ‘’Maame nurse boa me na me no new’’ which means Madam nurse help me because my child is dying. He was followed by his wife who was also shouting, wailing, and praying to the almighty God to intervene.

She looked very wretched and so confused. Quickly, I received the child on the resuscitation table and my initial assessment got me worried.

This was a three (03) year old toddler with severe difficulty in breathing, who was very restless and fighting for his life. He was drooling saliva from his mouth and crying inconsolably.

His shirt and trousers were stained with palm oil. Oxygen therapy was started after the pulse oximeter gave a reading of 40% on room air. (The normal should have been between 95% and 100%).

Other vital signs such as temperature, pulse rate, respiratory rate, and blood pressure were all higher than the normal ranges. The distressed parents were asked to remain calm and give a good history of the incident that led to this presentation in the child.

The paediatrician during the history taking gathered that the child had ingested a liquid substance, a pesticide, used for destroying insects and other organisms in the house.

This substance which looked colourless like water was in an empty water bottle sitting in one corner of their room. According to the father, they lost sight of this toddler for a few minutes only to find him holding this bottle and had the smell of the chemical all over his body. The amount that he swallowed could not be quantified since nobody was there at the time of the ingestion.

The parents found him crying and with a lot of saliva drooling from his mouth. Without knowing the best first aid to give, a neighbour who heard them shouting for assistance suggested they give him palm oil to induce vomiting. The parents forced the palm oil down the child’s throat, and this worsened the condition.

He was rushed to a nearby clinic, and they quickly referred him to a bigger facility because his condition was deteriorating.

While the medical team on assessment decided to transfer this child to the Paediatric Intensive Care Unit (PICU) for advanced care, my only prayer was for God to spare the life of this innocent boy because he was the fifth (5th) child to be admitted in that week with the similar history of a home accident.

I was not surprised because schools were on vacation and the children were home all the time. Unfortunately, we had lost two (2) children already from these incidents. As children grow, they become more curious and very vulnerable to environmental risks.

Since they spend most of their time at home and are not so aware of the hazards around them, they are normally vulnerable to home accidents. In the emergency room where I work, no week passes by without a child being rushed in for a case of a home accident.

I remember how a grandmother who came from the village to assist in the care of her granddaughter mistakenly gave this baby her antidepressant drug instead of the baby’s paracetamol syrup because all the drugs in the house were not well labelled and left in the same place.

Due to delays and inappropriate initial management, the baby died before they arrived at the ER. It was a terrible sight to behold, and this poor grandmother blamed herself for this death. Only God knows how she would live with this guilt for the rest of her life.

Recently, I listened to the news where a little boy who was less than a year old had suffered total burns because his mother had finished cooking; brought the oil from the fire and left it in an open space. She left sight of this infant for a short while only to hear him screaming at the top of his voice. She rushed out to see her son in the hot oil.

Another story was shared on how two infants got drowned in their own homes because the barrel filled with water was left uncovered.

In most homes, empty bottles are used to store poison and children cannot distinguish this poison from the usual liquid such as water, milk, or juice, that they contain, and this has caused a lot of harm to the children.

A new trend where children are allowed to drink directly from bottles instead of their drinking cups is another cause of this home accident.

This is because these children would drink any liquid, they get hold of in a bottle thinking it may be the same water, milk, or juice. These are very common stories we read and hear about every time, but how do we ensure our children are prevented from these home accidents.

It is very sad how the lives of several children are lost or injured yearly because of preventable injuries in our various homes.

Going back to the story of the three-year-old boy who ingested the pesticide, he pulled through after being on admission for almost two months.

A great appreciation goes to the formidable team of health workers who managed to bring him back to life.

Two weeks after being discharged, the parents came for review, and I could not believe my eyes when I saw them. The toddler looked so well and was playing around as if nothing happened about two months ago.

The mother was gorgeously dressed, and his father looked very gentle than the other day. A child’s sickness can make the parents so disordered. As the little boy ran around with all the smiles, it reminded me of my initial thinking about how paediatrics remains the best speciality in the medical profession.

The healing that takes place in children is so real and satisfying…. Hahaha.

The most vulnerable group of children who suffer these accidents are those between the ages of 3 to 5yrs. This is the age at which most children are very mobile and want to explore their environment, and do not know the difference between what a potential hazard is or not.

Instead of a home being a safe place, children are more likely to sustain injuries or die at home because of an accident. Home accident or unintentional injury is “any event occurring inside the home or near the home that results in an injury”.

An accident is “’ an undesirable or unfortunate happening that occurs unintentionally and usually results in harm, injury, damage, or loss’’. These accidents can happen anywhere in the home.

Choking/suffocation/strangulation. An example is the use of age-inappropriate toys and Electrocution from open naked wires left around the house.

Parents/Caregivers should be educated on home accidents and the recommended first aid to be administered before rushing the child to the hospital.

It is always important to consider a child’s age, cognitive abilities, kind of activities, and level of dependency when educating parents/caregivers on home accidents.

All detergents and poisons should be stored in a location where it is out of reach for children.

In case a child swallows any poisons, DO NOT GIVE PALM OIL. Rush the child to the nearest clinic.

Avoid storing corrosive and harmful substances in bottles meant for children’s drinks, juices, and milk. They easily associate it with their beverages.

All coins should be safely kept in containers and out of reach.

Give children age-appropriate toys during playtime. All liquid spillage on the floor should be mopped immediately to prevent falls and injuries.

Avoid children playing in the kitchen whilst parents are cooking. Cover all electrical sockets and electrical wires and should be kept out of children’s reach. Never leave hot drinks at the edge of the table since a child can pull them over to cause burns.

All buckets and basins should be left empty when not in use. Pools must be fenced. Wells and barrels must be covered to prevent any drowning.

Call the poison control centre in Accra on +23330244773 for assistance in case of any accidental ingestion of chemicals.

Though parents are overburdened with a lot of activities these days, constant supervision of their children will help curb the incidence of home accidents. Let’s all try and make our homes a safe place by keeping to good safety measures for the sake of our children.

Hottest Photo Reports
Catch up with all the political quotes from our politicians.
Advertise here
More from Family & Parenting
ModernGhana Links
Kobina Ansah and Elorm Ansah Tackle Bullying With New Children's Book, Animuonyam The Bully Stopper
Children’s Eye Health
Don't Give Your Children Access To Smartphone If They Are Not Well Informed About Online Safety
TOP STORIES