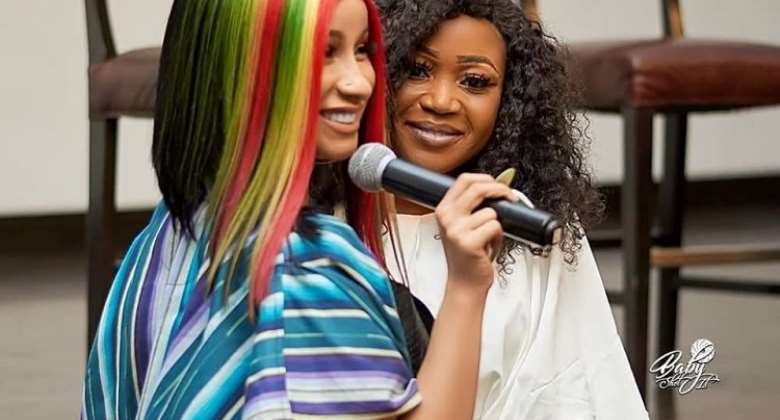 Belcalis Marlenis Almánzar popularly known as Cardi B has reacted to news of Akuapem Poloo's 90-day jail sentence posting a nude photo of herself and her seven-year-old son on social media.

Responding to a tweet by Afromusic_TV, Cardi B tweeted that a social media probation or community service would have been a more reasonable punishment.

The two got acquainted after Rosemond Brown met Cardi B in a private meet and greet session at Kempinski during her visit to Ghana as part of her concert in Africa.

The award-winning rapper was booked to perform at the Livespot X Festivals in Nigeria on Saturday, December 7, 2019, and then Ghana on Sunday, December 8, 2019.

Cardi B performed in Accra Sports Stadium on the same bill as Joey B, Shatta Wale, Sarkodie, Becca, Eno Medikal, Kofi Mole and a lot of others.

Akuapem Poloo was given a 90-day sentence in prison after she pleaded guilty to the publication of obscene material, and two counts of engaging in domestic violence.

The complainant in the case was Bright Appiah, who is the Director of Child Rights International Ghana.

He petitioned the police after the photo went viral on social media, and the matter was referred to the Domestic Violence and Victims Support Unit (DOVVSU).

She was handed her sentence on Friday, April 16, 2021, by an Accra circuit court.