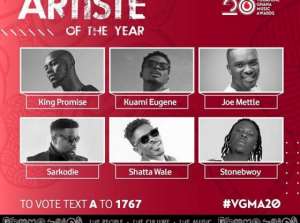 The battle lines have been drawn for the biggest awards to honour the creative works of Ghana’s gifted artistes at the Vodafone Ghana Music Awards 2019.

By the end of the announcements, VGMA Artiste Of The Year winner, Shatta Wale together with King Promise and Stonebwoy topped the list of nominations in 8 categories including the ultimate Artiste of the Year

For the first time being nominated in VGMAs Artiste Of The Year, Kuami Eugene had 5 nominations, whiles his signee mates, Kidi and Mzvee had 4 and 6 nominations respectively

Artiste Of The Year
Who takes the crown from the late Ebony? Who?
---Celebritieskasa.com