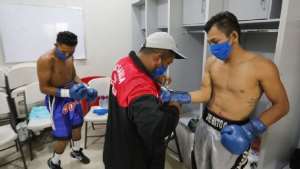 Various sporting events worldwide have been cancelled due to the coronavirus pandemic, but a boxing card at the Alexis Arguello Sports Complex in Managua, Nicaragua, promoted by former world titlist Rosendo Alvarez, was allowed to proceed Saturday -- with some provisions that were put in place to ensure the health and safety of everyone involved.

Though Nicaragua is one of the countries with no stay-at-home or social distancing measures in place, everyone was wearing a face mask inside the venue, as required by the Nicaragua Sports Commission. The commission expected a crowd of up to 800 fans or 10% of the arena's capacity. Only once the boxers were inside the ring did they take theirs off. Their trainers and other cornermen all wore masks throughout, as did everyone else around the ring, including the cameramen and photographers, who were on or near the ring apron. Same for the ringside officials, judges and referees.

Before entering the arena, everyone -- including Nicaraguan legend and current WBA junior bantamweight world titlist Roman "Chocolatito" Gonzalez -- was asked to wipe the bottom of their shoes, their body temperature was taken and a sanitizer product was sprayed on their hands. Even as he did interviews, Gonzalez kept his mask over his face.

Nicaragua is one of the few nations with live professional sports during the pandemic. Soccer, baseball and boxing have been conducted with fans in the stands. According to the Johns Hopkins pandemic tracking system, the country has only 12 detected cases of COVID-19 among its population, with three deaths.

A procession of police cadets came into the ring with various flags before the night's main event to accompany Tamara Martinez, who sang the Nicaraguan national anthem. She was one of the few who was not wearing a face mask; the two rappers who led one of the main event boxers into the ring weren't, either.

Fans were asked to be no closer than one meter -- about 3¼ feet -- from one another.

The whole night was a bit unusual -- but it could be the new normal for the time being.

Robin Zamora scored a hard-fought eight-round decision over Ramiro Blanco in the main event. The pair had fought one another in their previous outings, with Zamora scoring a second-round knockout, but Blanco was much tougher this time around.

It was nonstop action to start the fight between Zamora and Blanco, who consistently threw punches as they worked in close quarters. Blanco (18-7-3, 10 KOs) was more than willing to exchange and he certainly landed his share of punches, but he was consistently beaten to the punch by Zamora (16-7, 8 KOs) who was a bit quicker down the middle with his straight left hands from the southpaw stance.

Junior welterweight Freddy Fonseca (28-5-1, 19 KOs) was in control, steadily landing his long left crosses, and Alain Aguilar didn't seem to be too much of a threat after the fourth round. But the fight had a rather bizarre ending when Aguilar refused to get off his stool at the beginning of the fifth round, and he was given a 10 count. The fight was ruled a fifth-round TKO for Fonseca.

Welterweight hopeful Gabriel Escalante remained undefeated with a fifth-round KO victory over journeyman Mario Mairena. There wasn't much sustained action in this contest, but Mairena (2-20-1, 1 KO) got docked a point for excessive clinching in the fourth round. In the fifth, a pair of right hands from the undefeated Escalante (13-0, 7 KOs), followed by a clean left hook to the body, sent Mairena to his knees and the fight was quickly waved off.

The best fight of the undercard took place at the strawweight division between Eliezer Gazo (18-11-2, 3 KOs) and Byron Castellon (15-13, 3, 2 KOs), in a well-matched bout between two veteran fighters. While neither man possessed any noticeable punching power, they weren't shy in letting their hands go, as they engaged in a fast-paced bout that saw them mix it up consistently.

After six rounds it was Castellon winning on all three cards by the scores of 59-55 over the game Gazo.

In a scheduled six-round featherweight contest, Bryan Perez -- who entered the ring without a face mask -- scored a second-round stoppage of Lester Lara.

The taller Perez (12-11-1, 11 KOs) sent the southpaw Lara (16-11-2, 7 KOs) to the canvas with a left hook late in the second round. Lara was able to get back on his feet and continue but he was struck almost immediately by a right hand that sent him down for the second time just seconds before the bell and the bout was called off.