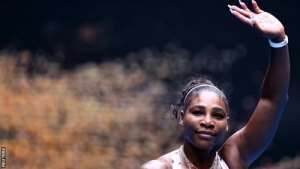 Serena Williams underlined why she is the Australian Open favourite with a rapid first-round win, while defending champion Naomi Osaka also advanced.

Williams, chasing a record-equalling 24th Grand Slam title, took the first set in 19 minutes in a 6-0 6-3 victory over Anastasia Potapova.

World number one Ashleigh Barty and Britain's Johanna Konta are also in action on Monday.

While Williams claimed a convincing victory over her Russian opponent in just 58 minutes, there was an even faster win for seventh seed Petra Kvitova, with the 2019 runner-up demolishing fellow Czech Katerina Siniakova 6-1 6-0 in 51 minutes.

Williams puts aside air concerns to advance
The tournament started as scheduled on Monday after air quality improved in Melbourne, although some matches were later interrupted by rain.

Last week's qualifying event had been disrupted by delays because of the air pollution caused by widespread bushfires.

Williams, who had a pulmonary embolism after giving birth in 2017, said she had been concerned about what conditions might be like during her match.

"That is still a concern for pretty much everyone. Every day all the players and the tournament make sure that all the players are updated on what the play conditions would be like," said the American.

"It's literally every day, we are just waiting every day to see how the air quality would be. Today, it seemed normal. Yeah, it seemed pretty good."

Eighth seed Williams, who won her first WTA title in three years in the run-up to the opening Grand Slam of the year, will play Slovenia's Tamara Zidansek next.

But Williams immediately broke back and pulled away to victory.