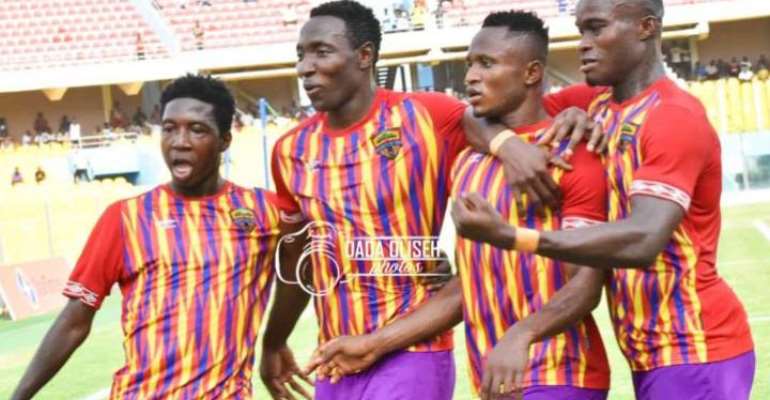 Two expertly take free kicks, one from Joseph Esso and the other from Kofi Kordzi has earned Hearts of Oak a 2-1 win over Ebusua Dwarfs on Match Week 3 of the 2019/2020 Ghana Premier League season.

The Phobians have endured a difficult start to the 2019/2020 Ghana top-flight season and went into today’s fixture determined to earn the win that will get their season back on track.

After a good start to the match, midfielder Benjamin Afutu hit the crossbar after eight minutes of action before Joseph Esso’s close-range effort was saved by the opposing goalkeeper.

The home team built on the two chances and dominated play for most parts of the first 30 minutes before they were presented with a fine opportunity two minutes later.

Star-man Joseph Esso stepped up and converted a free-kick to score Hearts of Oak’s first goal of the Ghana Premier League season which eventually inspired the side to a first win of the campaign as well.

Later in the second half, another free-kick opportunity was presented to the Phobians in a similar position. This time around it was bulky attacker Kofi Kordzi who stepped up to take the kick.

His effort beat the human wall and curled straight into the back of the net to give Hearts of Oak a two-goal cushion.

Ebusua Dwarfs came in strong with some counter-attacking plays and managed to pull one back through an effort from Albert Ato Hammond.

It was however not enough at the end of the 90 minutes with the Phobians cruising to victory to bag their first 3 points.