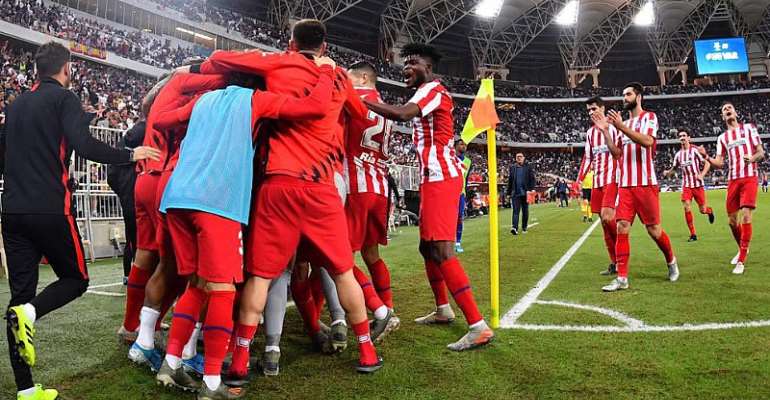 Ghanaian midfielder Thomas Partey impressed for his Atletico Madrid side on Thursday night to help them defeat FC Barcelona 3-2 in the Spanish Super Cup.

The four-club competition is being held in Saudi Arabia this year and features other clubs including Real Madrid and Valencia.

The hardworking midfielder worked his socks off and helped his side to see off FC Barcelona at the end of the 90 minutes.

Though the first half ended goalless, Atletico Madrid took an early lead after recess when captain for the side Koke found the back of the net.

The Catalans came out strong after going behind and restored parity through star man Lionel Messi. Soon after, Antoine Griezmann scored against his formal club to give Barcelona the lead for the first time in the match.

Atletico did not give up but pushed for an equalizer to get back into the game until they finally got the breakthrough courtesy a strike from Alvaro Morata on the 81st minute from the penalty spot.

Five minutes later, Angel Correa went on an impressive run into the 18-yard box of Barcelona before firing in his effort past Neto to win the match for Atletico Madrid.

Thomas Partey and his side will now take on city rivals Real Madrid in the finals of the Spanish Super Cup on Sunday, January 12, 2020.