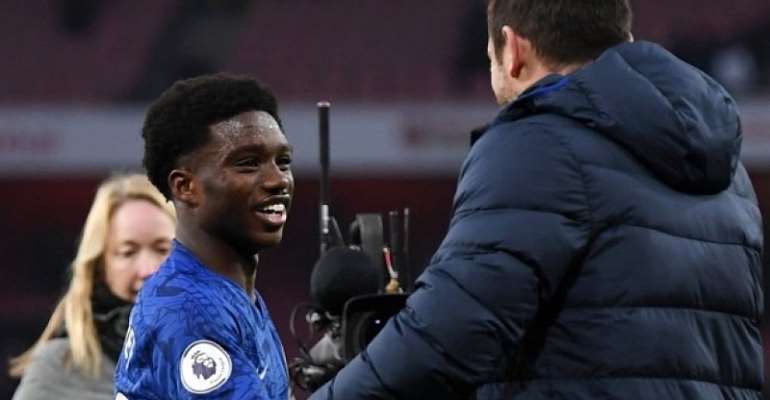 Chelsea coach, Frank Lampard has hailed Ghanaian youngster Tariq Lamptey after making his debut for Chelsea in their win over Arsenal on Sunday.

Late second-half goals from Jorginho and Tammy Abraham overturned Pierre-Emerick Aubameyang’s early opener for Arsenal to secure a 2-1 victory for Chelsea at the Emirates Stadium.

The 16-year-old became the latest Chelsea academy graduate to be given a senior debut by Lampard this season as he was brought on in the second half against Arsenal.

The youngster who was deployed as a wing-back after Alonso and James were ruled out due to injuries was a delight to watch with his tackles and speed on the ball.

And Lampard insists he had no reservations about playing Lamptey after speaking with his assistant Jody Morris and Joe Edwards, who is part of the Chelsea first-team coaching staff and was previously the club’s development squad head coach.

"Tariq Lamptey is a credit to Jody Morris and Joe Edwards because when we sat and analysed the last two days and we knew Cesar Azpilicueta had a small injury and Reece James is injured then we are looking at options for a right-back or right wing-back," he said.

"They said believe in him, trust in him, because they did and I listened to that. ‘We felt it was the right time to bring him into the game and he was a catalyst because we were getting down the sides and he gave us a little bit more of an edge.

"He has pace, a low centre of gravity and can go by people," he added.