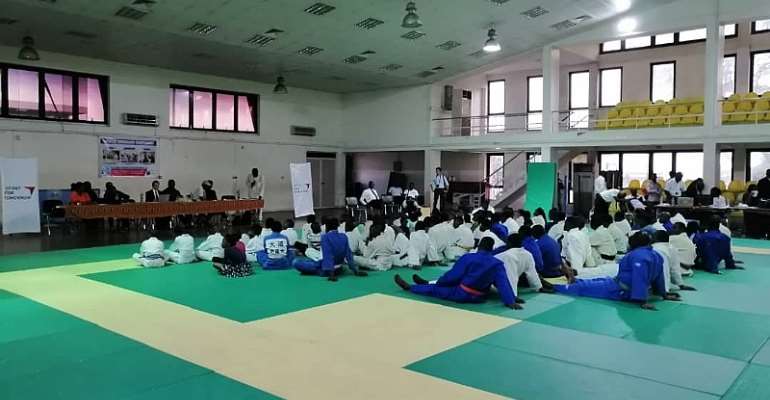 Ghana’s experienced judoka Eleazar Dodoo won in a spectacular fashion against fellow compatriot Godwin Gaiety in their 81kg final contest yesterday at the Hathiramani Hall of the Accra sports stadium.

The Under 15 girls category was equally interesting with Evelyn Dzato triumphing over Ophelia Danso with Ramatu Sulley and Vania Mensah placing third and fourth respectively.

Tintom Amaria and Yaw Kelvin Boafo registered their respective wins in the under 10 and 8 boys categories.

The event which was graced by his Excellency the Ambassador of Japan to Ghana- Mr.Himeno was very competitive and attracted an appreciable level of spectatorship. It was again graced by the Deputy Director of the National Sports Authority Mr. Saka Quaye and the President of the Ghana Judo Federation-Mr. Emmanuel Tetteh.

Speaking in his opening remarks the Judo President iterated the challenges the federation is facing in the technical division. “we have realized there is a technical challenge in our national team so come early next year we are going to organize a training programme for all referees”-he said.

He implored all referees to sharpen their skills thereof and await that programme. He stressed that Judo is a way of life and a peaceful sport that can be employed in our daily lives.

The Japanese Ambassador in his opening remarks expressed his happiness to witness the wonderful Judo community. He mentioned the need to show support and attention to martial arts since the sport is one of peace and control over the body and mind. “Together will like to have even greater attention of the sport in future.”-he concluded.