EFL Cup: Spurs Knocked Out Of By Fourth-Tier Colchester; Man City, Arsenal Through 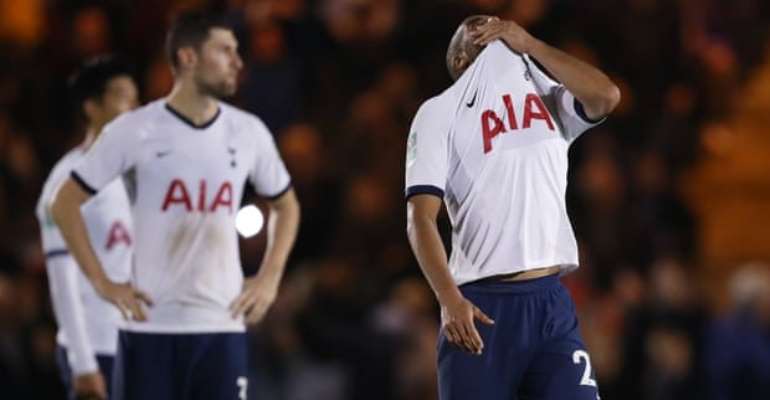 Carabao Cup football returned this evening with League Two Colchester knocking Tottenham out of the competition on penalties. Arsenal, Manchester City and Everton all cruised into Wednesday’s fourth-round draw.

Fourth-tier Colchester United dumped last season's Champions League finalists Tottenham Hotspur out of the League Cup 4-3 on penalties after a goalless 90 minutes in the third round on Tuesday.

Tottenham had named a side that should have been too strong for Colchester with the likes of Dele Alli, Lucas Moura and Eric Dier all in the starting line-up.

There was a place too for highly-rated youngster Troy Parrott, who came the closest to scoring in normal time when he hit the woodwork.

Spurs dominated possession through with 75 per cent of the ball but only managed four shots on target, although that was four more than their opponents.

Heung-Min Son, Christian Eriksen and Erik Lamela were all deployed from the bench as Mauricio Pochettino tried to avoid the lottery of penalties, but it was all in vain as 90 minutes heralded no more than a 0-0 draw.

In the shootout, substitute Eriksen and forward Lucas Moura both missed, ensuring Tom Lapslie's spot-kick was a triumphant one and triggered a pitch invasion on a night that will live long in Colchester fans' memories.

While Spurs sank, rivals Arsenal struggled to stay above water - literally - at the Emirates. Heavy rain and travel disruption saw kick-off delayed by 15 minutes to give the 8,500-strong Nottingham Forest contingent the chance to take their seats.

However, they barely had cause to get out of them as teenager Gabriel Martinelli scored his first senior goal after 31 minutes before the Gunners opened up the tie after the break.

Rob Holding, Joe Willock and Reiss Nelson all got on the score-sheet before Martinelli doubled his career tally stoppage time to give the scoreline a one-sided look at 5-0.

Holders Manchester City powered past second-tier Preston North End 3-0 with England striker Raheem Sterling scoring the opener and setting up another at the Deepdale ground.

At Fratton Park, first-half double from Danny Ings helped Southampton to a 4-0 win at League One Portsmouth in the first south-coast derby in seven years between two of the fiercest rivals in English soccer.