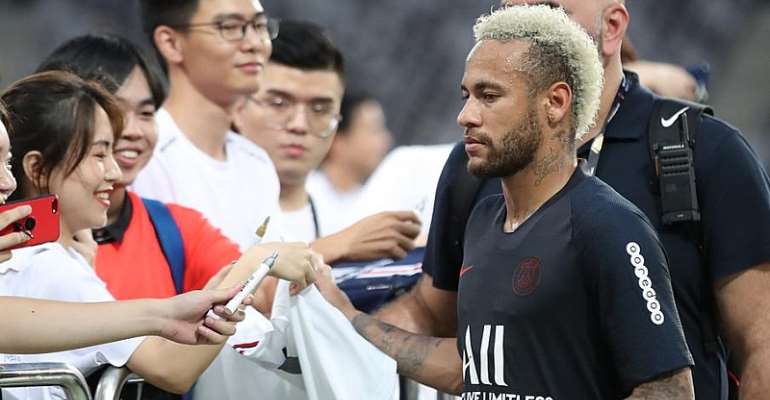 Neymar’s decision to join Paris Saint-Germain in 2017 was motivated by a desire to establish himself as the best player in the world, but a troubled time in the French capital has left the Brazilian at risk of wasting the best years of his career.

The closure of the transfer window has finally brought to an end the lengthy saga surrounding the future of the world’s most expensive player, who will stay at PSG having failed to get the move back to Barcelona he craved.

His former club could not complete a deal to rescue the 27-year-old from his apparent nightmare in Paris, with Neymar so determined to return that sports daily L’Equipe reported he offered to pay 20 million euros ($22 million) from his own pocket towards the fee.

PSG paid 222 million euros ($264 million at the time) for his services while committing reported wages of 36 million euros a year.

Yet he has not done nearly enough at the Parc des Princes in two seasons marred by injuries and interrupted by off-field distractions.

In August 2017, the desperation of PSG’s Qatari owners to win the Champions League appeared to fit with Neymar’s own obsession with emerging from Lionel Messi’s shadow and winning the Ballon d’Or.

“I would love for us to meet in two years and see what his value will be compared to today. At least double,” said PSG president Nasser Al-Khelaifi at the time.

MISSING AT KEY MOMENTS
However, since moving to the Parc des Princes, Neymar has appeared in barely half of his club’s matches.

When he has played he has frequently been brilliant, scoring 51 goals in 58 games. He has won back-to-back league titles and one Ligue 1 player of the year award.

Without him, they lost in the last 16 to Real Madrid in 2018 and then to Manchester United this year.

After suffering a broken foot for the first time in February 2018, Neymar missed the rest of PSG’s season to be ready for the World Cup. Brazil went out in the quarterfinals.

In January this year, Neymar fractured the same foot, missing the crunch part of PSG’s season during three more months out.

He has since missed the Copa America with an ankle injury and was accused of raping a Brazilian woman at a Paris hotel in May – the case was dismissed in August by a Brazilian judge.

Neymar has never learned French and has often appeared too busy with off-field distractions, including throwing lavish birthday parties and making a cameo appearance in his favourite Netflix series.

GOOD FOR THE PSG BRAND?
He remains one of the biggest sporting celebrities on the planet, but he must put the last few months behind him quickly and deliver, otherwise, there may well be nobody rich enough who is willing to take a chance on buying him next year.

PSG supporters have made clear their unhappiness towards Neymar, yet those feelings can still change if he brings success on the pitch.

In the boardroom, there is also the realisation of his commercial value – when Neymar arrived, Al-Khelaifi spoke of “a project of two brands: we’re associating the Neymar brand and the PSG brand.”

They have since signed major sponsorship and endorsement deals with the likes of Nike, with Neymar’s presence alongside Kylian Mbappe playing a major role.

“PSG are a young club who need a big media profile to help them develop. That is what Neymar has brought, just like Zlatan (Ibrahimovic) or (David) Beckham before him,” French sports marketing specialist Jerome Neveu told AFP.

Ending the Neymar experiment might have allowed PSG to start afresh, although Mbappe and coach Thomas Tuchel had stated their wish that he stays.

“I like Neymar, I want to keep playing with him, with Kylian and with everyone,” said Tuchel recently.

Now all eyes will be on Neymar to see if he can put this episode to bed, although his three-game Champions League suspension means it may be some time yet before he makes any genuine impact.