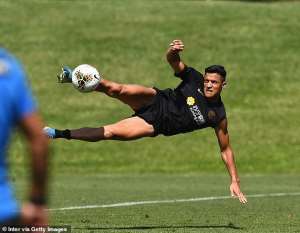 Alexis Sanchez has taken part in his first training session at Inter Milan since completing a season-long loan switch from Manchester United on Thursday.

The Chilean star had endured a nightmare spell at Old Trafford and was sidelined under manager Ole Gunnar Solskjaer after a string of injuries and below-par performances.

But after once again linking up with former United teammate Romelu Lukaku in Italy, Sanchez appeared to be in high spirits as he took part in a series of drills.

His new side posted several snaps from the session at the Angelo Moratti Sports Centre, in which Sanchez could be seen being put through his paces as he builds his fitness.

The Chilean international was thrust straight into the action, and was pictured connecting with an acrobatic volley mid-air as new boss Antonio Conte watched on.

New Inter star Lukaku will be hoping to form a deadly partnership with Sanchez as the Italian giants attempt to compete with Juventus and Napoli for the title - and the Belgian frontman afforded the wide man a warm welcome.

The 30-year-old forward's turbulent time in Manchester was brought to an end after Conte once again dipped into the transfer market to strengthen his side.

And Sanchez will be hoping to reignite his career in a division he will be accustomed to - having already played in the Italian top flight for three seasons with Udinese from 2008 to 2011.

However, a torrid 18 months for the attacker resulted in just five goals in 45 appearances and limited match action.

Inter are understood to be paying £4.5million of Sanchez's substantial annual salary of £21million - leaving his former side to subsidise a large bulk of his hefty wage packet.

But United manager Solskjaer admitted the wide man had to take up his new challenge in order to help salvage his ailing career.

He had said: 'Alexis needed to go. We know it's not really worked out for him. It's for him to restart, playing regularly and scoring goals.'