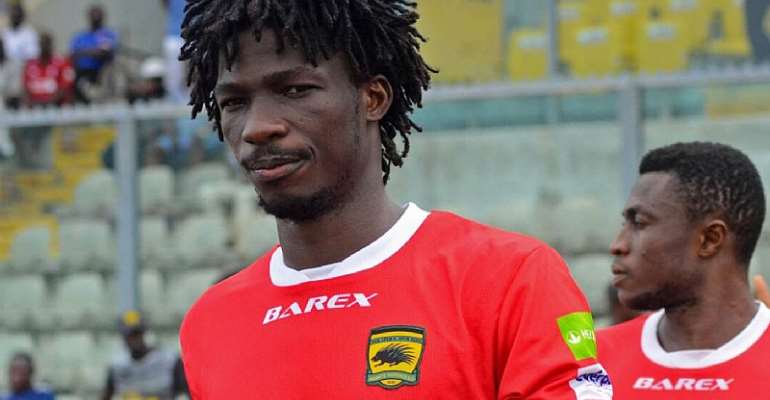 Asante Kotoko livewire, Songne Yacouba is demanding for better accommodation in Kumasi, urging the management of the club to provide him with a befitting apartment.

According to Jesse Jantuah, who is the manager of the forward, insisted that the 26-year-old had been staying in Sports Hotel in Kumasi (a facility which belongs to the Executive Chairman of the club, Dr Kwame Kyei) ever since he joined the Porcupine Warriors, and that did not make it conducive for the player’s family, especially his wife and parents, who wanted to visit him.

Speaking to Kumasi based Oyerepa FM, Mr Jantuah reiterated that the player had expressed his grievances to the management of Kotoko in a meeting and hoped that a solution would be reached soon.

“Sogne Yacouba has notified Kotoko management that he is unhappy and has explained to them why he doesn't want to continue living in Sports Hotel but rather prefers a permanent home in the city.

"His wife and parents wanted to visit him but they couldn't come down to Kumasi and with his religion, his living at the facility has been uncomfortable," Jantuah noted.

However, Yacouba’s manager noted that the player still loved the club and that he was not forcing his way out.

“It’s not true that Sogne Yacouba has decided to terminate his contract. The only thing that can keep him away from Kotoko is either an injury or a good deal that both Kotoko and our camp will be satisfied with,” he asserted.

Some two weeks ago, a close source from Kotoko revealed to the Graphic Sports that ZESCO, Orlando Pirates and two other Egyptian clubs, Zamalek and Smouha FC, had joined the race for the signature of their talisman, Yacouba, pending negotiations for his release or otherwise.