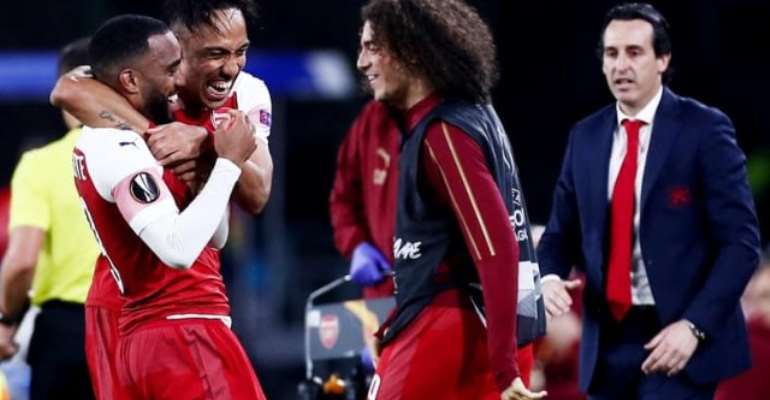 Alexandre Lacazette's first-half free-kick eased Arsenal into the Europa League semi-finals as they completed a 3-0 aggregate victory over Napoli.

Lacazette's 25-yard effort flew into the top corner after the hosts enjoyed the better of the early chances.

Arkadiusz Milik had a goal ruled out for offside while Petr Cech saved well from Jose Callejon.

Arsenal are scheduled to host Valencia in the first leg of their semi-final on Thursday 2 May.

In the end, it was a comfortable night's work for the Gunners as Unai Emery marked his 50th game as their manager.

Arsenal, who arrived at the Stadio San Paolo with a 2-0 lead from the first leg in London, could have doubled their margin of victory on the night but home goalkeeper Alex Meret superbly saved from Pierre-Emerick Aubameyang after the break.

The only negative aspect of the evening for Arsenal was Aaron Ramsey hobbling off with a suspected hamstring injury.

The Wales midfielder was withdrawn in the first-half and will be a doubt for the club's remaining fixtures before his summer move to Juventus.

Census: People suspect us to be armed robbers, some attack u...
39 minutes ago