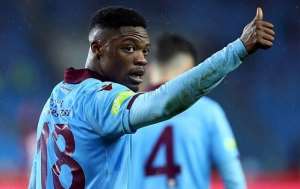 Ghanaian forward, Caleb Ekuban is determined to commit his future to Turkish club, Trabzonspor, despite interest from other top European clubs.

The 24-year-old who joined the Turkish side on loan from Leed United on a season-long loan has become the centre of controversy over his future after impressing with the Turkish club.

According to multiple reports, the Championship club are eager to bring back the striker while Trabzonspor are ready to trigger his £1million buyout clause to make his stay permanent.

But the player who spoke to Turkish media outfit, daily Sabah, has clear all doubts by indicating that he would want to commit his future to the Turkish club.

“Of course I would like to stay,” the 25-year-old striker said in an interview and indicated that his first option would obviously be with the Turkish club, “my first choice is Trabzonspor”, he added.

The Italy-born Ghana international, who made his debut for the Black Stars during their Africa Cup of Nations qualifiers against Kenya in March, has so far made 29 appearances in all competition for Trabzonspor scoring eight and providing three assists.