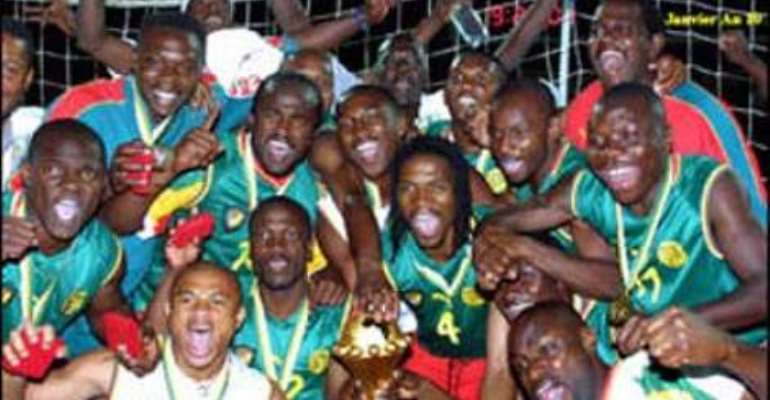 On 10th February, 2002, Cameroon became the first team in more than three decades to successfully defend the African Nations Cup here downing Senegal in a penalty shoot-out after a goal-less final.

The champions - who also won the 2000 tournament on penalties - held their nerve to prevail 3-2 and clinch a record-equalling fourth Nations Cup victory. Goalkeeper Alioum Boukar was the hero for the 'Indomitable Lions', saving the fifth and final spotkick from Senegal skipper Aliou Cisse, to spark jubilation amongst his team-mates at the March 26 Stadium.

The win made Cameroon the first side since Ghana in 1963 and 1965 to record back-to-back victories in the Nations Cup.

The shoot-out lottery settled what had been an absorbing encounter, which saw Cameroon dominant for long spells but unable to breach a resolute Senegalese rearguard action.

With the score locked 0-0 after 90 minutes, it was Cameroon who came closest to breaking the drought in extra-time when striker Pius Ndiefi sent a free header just wide with Senegal goalkeeper Mario Sylva scrambling.

Ndiefi had nearly settled the match in normal time, when a clever header from Samuel Eto'o created confusion in the Senegal defence.

Ndiefi - starting in place of the injured Patrick Mboma - crashed his low angled shot across Sylva but could only watch as the ball cannoned back off the post.

It was the nearest Cameroon came to scoring in a half which had also seen them unlucky not to be awarded a penalty after Ndiefi appeared to have his shirt pulled by captain Cisse.

Schafer - allowed back in the dug-out after successfully appealing a one-match ban on Saturday - had already gesticulated wildly after two heavy tackles on Eto'o went unpunished.

Earlier the first half had seen Cameroon finish marginally on top despite Senegal having two scoring opportunities.

Cameroon were aggrieved not to have reached halftime a goal to the good. An Eto'o header was disallowed after Ndiefi was adjudged to have fouled Senegal 'keeper Sylva.

Senegal meanwhile had squandered a glorious chance with only five minutes gone, when Henri Camara's shot from seven yards clipped the top of the crossbar after a neat lay-off from Al-Hadji Diouf.

Camara was the culprit for another Senegalese miss shortly afterwards. Cleverly put through by African player of the year candidate Diouf, Camara's well-struck shot hit the target but Cameroon goalkeeper Boukar was equal to the challenge.