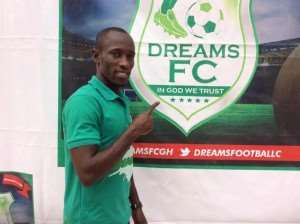 Ex-Hearts midfielder Emmanuel Hayford has vowed to silence his critics after marking his debut for the club against Liberty in a friendly on Wednesday.

The 25-year-old was frozen out at the capital-based club over claims of indiscipline.

The hugely talented midfielder has been given a lifeline after being snapped up by Dreams FC.

Hayford has vowed to prove his critics wrong this season.

'Of course, yes! What went on some months ago really hurt me so much and I think this is the time for me to prove them wrong by giving Dreams FC what I have in me and make sure I'll be committed to the team both on and off the pitch,' he said.

The box-to-box midfielder is expected to bolster the squad ahead of the new campaign.