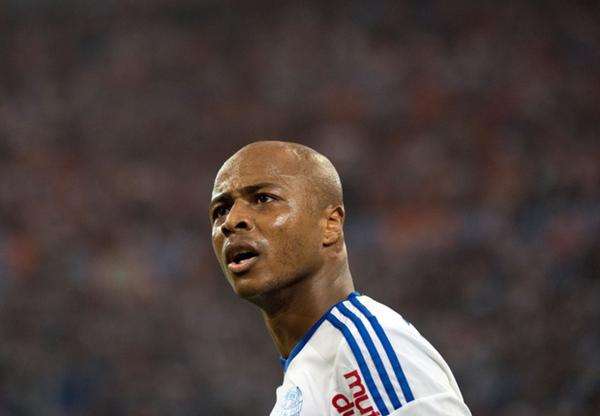 Things turned from bad to worse for Ghana star Andre Ayew as he was shown the red card after the final whistle last night as his Marseille side lost 3-2 to PSG in the French Ligue 1 top-liner on Sunday night.

Referee Ruddy Buquet issued the card to Ayew despite the game ending but was recorded in the 96th minute.

The 25-year-old had earlier gone into the 38-year-old's pocket for a bad foul in the 54th minute in a bitter anticlimax the winger was red carded for an unsporting behaviour with the game ending.

The event happened on a night hundreds of agents and scouts had gathered at Marseille's Stade Velodrome to see the Black Stars deputy captain in action ahead of likely summer move.

For Marseille though the defeat is painful, they are still without a win against PSG since 2011.

Le Classique lived up to its name at the Stade Velodrome as PSG went top of Ligue 1 with a thrilling 3-2 defeat of Marseille on Sunday.

Andre-Pierre Gignac's 30th-minute opener was cancelled out within five minutes by Blaise Matuidi's equaliser, capping a roaring start to the match.

Cignac then struck with his second of the night in the 43rd. But PSG pulled level in the 49th minute behind Marquinhos' stabbed effort from a Zlatan Ibrahimovic free kick, before taking the lead — and the points — through a Jeremy Morel own goal from a cross just two minutes later.

The victory sees Laurent Blanc's men move a point clear of Lyon atop the league standings, while Marseille now sit in third, five points off the pace.