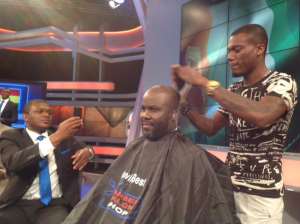 Ex-Ghana defender Samuel Osei Kuffour lost his bet and had his hair shaved live on TV after the Black Stars suffered penalty shoot-out heartache in the final of the 2015 Africa Cup of Nations.

The ex-Bayern Munich star had promised he was going to have his hair cut if the Black Stars missed out on the trophy.

Sammy Kuffour
He was a pundit on South African Pay TV channel SuperSport.

Ghana missed 9-8 on shoot-outs after 22 spot-kicks.

Osei Kuffour won an earlier bet when he boldly announced that he would voluntarily shave his hair live on TV if South Africa had beaten Ghana in their final Group C match.