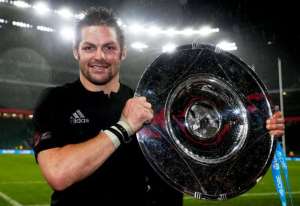 If all goes to plan, the All Blacks will be back in London for the semi-finals of the 2015 showpiece in just under 12 months' time, and they were able to lay down a gauntlet to England as preparations for the tournament began in earnest on Saturday.

The defending world champions kicked off their Northern Hemisphere tour with a 24-21 victory on a rain-soaked afternoon, as a fantastic second-half performance took the game away from England.

Trailing 14-11 at half-time after Jonny May's fourth-minute try had been cancelled out by Aaron Cruden, the All Blacks upped the tempo after the break and tries from McCaw and Charlie Faumuina, a first in Test rugby, put them in control.

A late penalty try gave England hope but the hosts never quite had enough.

Speaking to Sky Sports after the game, McCaw said: "That was a good classic Test match that you have come to expect between England and New Zealand.

"Credit to England for taking their opportunity [to score the first try], we were caught napping a little bit but they took their chance.

"It felt like we had control of the second half bar the last few minutes so we are pretty happy in that regard. Ten months is a long time in rugby [ahead of the start of the World Cup] so we will not get too carried away by this win.

"We are just happy that our last visit to Twickenham of the season is a win. Ten months is a long time in rugby though, we will have to see if it has any effect at the World Cup."