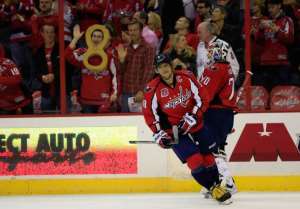 Ovechkin had two assists for the encounter on Tuesday, his first in the 11th minute of the first period seeing him Peter Bondra's 825 points - goals or assists - for the Caps.

He teed up Nicklas Backstrom for an equalising goal, before providing the go-ahead goal for Joel Ward on a powerplay to take Washington 3-2 up - and taking Ovechkin's point tally to 827.

However, a positive result was not to be for Ovechkin - Markus Granlund making it 3-3 late in the third period before Sean Monahan netted the clutch goal for the Flames in overtime.

The St Louis Blues made it six wins in a row, edging the New Jersey Devils 1-0 courtesy of Vladimir Tarasenko's third-period goal.

The Penguins downed the Minnesota Wild 4-1 despite having 12 fewer shots on goal, with Pittsburgh goaltender Thomas Greiss making 33 saves.

Arizona led 3-0 early in the second period after goals to Sam Gagner, Martin Erat and Antoine Vermette - but endured a nervous finish after Toronto made it a one-goal game for the final seven minutes.

In a battle of two strugglers, the Carolina Hurricanes climbed above the Columbus Blue Jackets at the foot of Metropolitan with a 4-2 win.

Nick Foligno scored twice for the Blue Jackets but it was not enough for them to avoid a sixth straight loss.

The Hurricanes, meanwhile, made it three consecutive wins, to match the Blue Jackets on eight points - and eclipse them in the table on fewer games played.

The Vancouver Canucks stormed home to down the Colorado Avalanche 5-2.

Trailing 2-0 deep into the second stanza, Henrik Sedin pulled one back before the final period - and four unanswered goals, two from the stick of Nick Bonino, saw Vancouver canter to victory.

Jakub Voracek struck twice in the first period as the Philadelphia Flyers set up a 4-1 victory over the Edmonton Oilers.

The Los Angeles Kings came from behind to beat the Dallas Stars 3-1, Blake Wheeler got a goal and an assist in the Winnipeg Jets' 3-1 victory over Nashville Predators, while Brad Marchand had an assist in regulation before the winning overtime goal in the Boston Bruins' 2-1 triumph over the Florida Panthers.

The Ottawa Senators enjoyed a 3-1 win over the Detroit Red Wings.