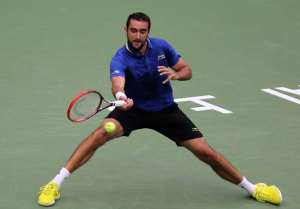 The US Open champion had already confirmed his place in the ATP World Tour Finals on Saturday, before he saw off Mikhail Kukushkin in the semi-finals off the ATP 250 hard-court event in Moscow.

That victory set up a final clash with fifth seed Bautista Agut, who had beaten Ernests Gulbis in his last-four encounter.

The big-serving Croat had a shaky start in the opening set and was forced to save three break points before eventually holding for 1-1.

Cilic then forced two break points of his own in game seven, and took advantage of the second to claim the initiative.

It looked as though Bautista Agut might level when he took control with Cilic serving for the set at 5-4, but the world number eight rescued another three break points before moving ahead in the match.

The second seed carried that momentum into the start of the second, breaking the Spaniard immediately for an early lead.

It was an advantage he never let slip, as Bautista Agut failed to make any inroads against the Croat's serve - a long backhand ultimately enabling Cilic to lift his third ATP Tour title of 2014.