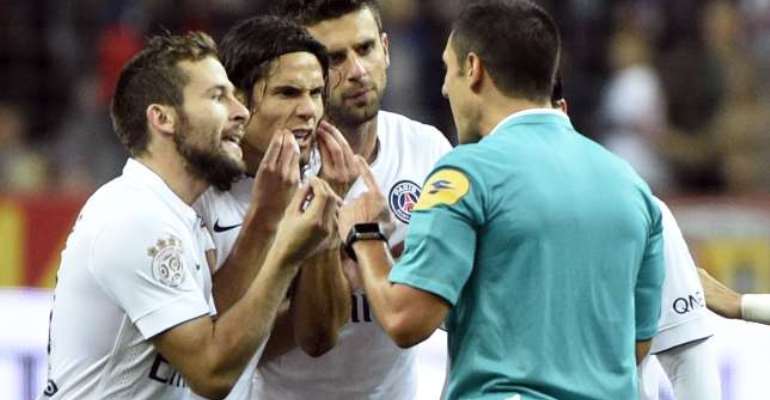 Maxwell scored the second goal of the champions' come-from-behind win in their 'away' fixture at the Stade de France in Paris - with Lens forced to relocate several matches due to construction works at their Stade Felix-Bollaert.

Uruguayan striker Cavani was pulled down in the box to earn PSG a penalty but, after he converted it for a two-goal buffer, the capital club's luck ran out.

Jean Gbamin was given a second yellow for dragging down Cavani but Laurent Blanc's men were also down to 10 when Cavani was inexplicably yellow carded for simulating shooting a sniper before his complaints at the aforementioned yellow led to his dismissal by referee Nicolas Rainville.

Maxwell said it was an undeserved sanctioned for Cavani, who had just scored his first goal in almost a month.

"Edinson Cavani was disappointed with the red card. I do not think he deserves to be sent off. He's scored - he could have done even more," the Brazilian full-back said.

"I think everybody saw what happened and there is no point commenting."

Maxwell said he was happy with his long-range goal, the defender scoring into a vacant net from distance after Lens goalkeeper Rudy Riou was drawn well off his line.

"I really enjoyed my goal tonight, I thought it was a great team goal," he said.

"The ball came to me very quickly. I just tried to control the ball and saw that I could shoot.

"My right foot is not the best usually but sometimes it can work well.

"That's an important goal for the team. We are especially pleased with the victory and a vital three points."

Another Brazilian - Lucas Moura - said the PSG squad was disappointed for Cavani, who has been linked with Premier League heavyweights Arsenal, Liverpool and Chelsea.

"I think it is very difficult for Edinson Cavani with the red card tonight after he scored," the PSG winger said.

"The decision is difficult for the entire squad. We did not understand what happened.

"Now we have to forget this game and think about the [UEFA] Champions League match with APOEL in midweek."