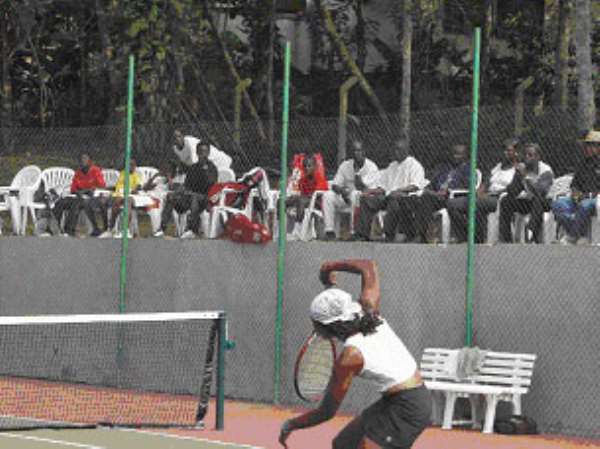 Officials of the Ghana Tennis Association (GTA) have denied the report that the national tennis team, the Golden Rackets, were stranded in Ghana after they had returned from Namibia where they competed in the Europe Africa Zone II Davis Cup tournament.

They further denied a report that the GTA discriminated against certain players while it favoured Adjei Darko, Ghana's number two seed, by giving him his return ticket to fly back to his adopted country ahead of his team mates.

The angered officials consequently described the team that was made up of foreign-based players, as ungrateful and disloyal to the nation. They include Gunther Darkey, Solomon Koomson, Sammuel Fumi, all based in London, and the US-based Henry Adjei Darko.

This was in reaction to a story which said the Golden Rackets had threatened to boycott subsequent international competitions because the government had allegedly failed to honour all the promises it made to them before their departure to Namibia.

According to the officials, the story indicated that the air fares incurred by the players were not refunded to them, thereby making them stranded in Ghana which they claimed has no iota of truth.

The officials revealed that aside their air fares, each player received $1,000 as their appearance fees, $500 as equipment grant and $500 as winning bonus for every match won.As a result, Henry Adjei Darko who won a total of three matches came home with $1,500 as his winning bonus and Darkey $1000, but the rest could not benefit from the bonuses after losing their matches to their opponents in the singles stage.

"All these moneys were given to them in Namibia, therefore we are indeed startled to read such story from the press because the reporter defied the basic ethics of journalism by not contacting us to hear our side of the story to ensure a balanced report".

The officials led by the Chairman of the GTA, Mr Jefrey Abeasi, explained that in accordance with the ethics of the association, the Secretary General, Mr C.K. Ata, requested for tickets of the players to enable him to process their return arrangements but they all failed except Adjei Darko who presented his ticket and stressed that he had tournaments lined up from May 22 and that he would leave Ghana on May 19.

This they said made it easy for the officials to process Adjei's ticket before the tournament came to a close. Gunther submitted his ticket later and similarly informed the association of his departure date as May 21, even though the date on his ticket was May 26.

However, Samuel Fumi and Solomon Koomson failed to submit their tickets, which made it impossible for Mr Ata to have them done at the requested time. "It was only when they returned from Namibia that Fumi and Koomson submitted their tickets. Unfortunately, the tickets did not bear the costs of fares, even though their departure dates were indicated. Koomson was to leave on May 25 and Fumi May 26".

"During the processing of the tickets, an irregularity was observed on Gunther's ticket, thereby delaying his departure. Since Adjei Darko had tournaments lined up and had given us prior notice, the association had to find money to buy his ticket whilst attempts were made to address the difficulties associated with the rest".

The Rackets last two weeks excelled in this year's edition of the Davis Cup competition, earned promotion to Euro-Africa Zone Group II.Even with that, the GTA has emphatically stated that this is not the first time that the nation has been promoted to Euro-Africa ZoneII, and for that matter would not like any player to hold the nation to ransom.