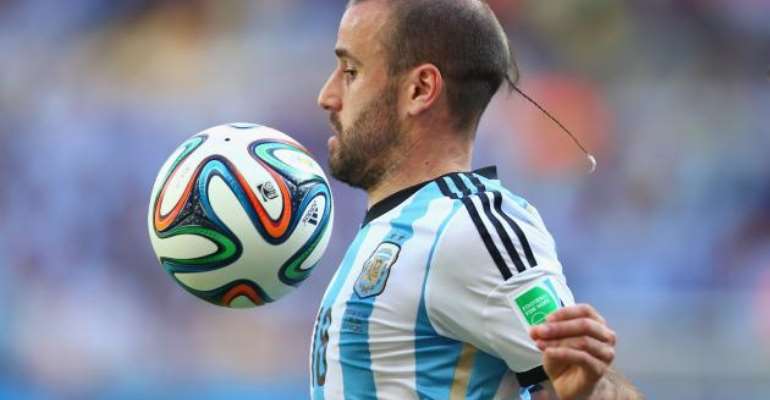 There are two things that set professional footballers apart from regular people: They are exceptionally good at kicking a ball and they command enough respect that they can still be taken seriously with a ridiculous haircut.

There were plenty of bad barnets on display at the 2014 World Cup, and here's 10 of the worst…

In a campaign dominated by  in-fighting  and  shameless financial demands , it's fair to say that Ghana did not cover themselves in glory in Brazil.

On top of all that nonsense, their talismanic captain Asamoah Gyan decided it was best to give us a follicle-based reminder of his squad number, by shaving and dying a “3″ into the sides of his head.

It's not a good look, but hey, at least he didn't miss any penalties this time.

Kyle Beckerman
Kyle Beckerman
There is a reason why the majority of footballers do not have large dreadlocks. They would get heavy, they give the opposition something to grab onto and they probably aren't too pleasant when drenched in sweat.

Despite these obstacles, Kyle Beckerman has sported dreads through most of his senior career. And to his credit, he had a really excellent World Cup. He just has rubbish hair.

Nestor Pitana
Nestor Pitana
Lionel Messi and Co. may have failed to seize the glory at the 2014 World Cup, but that wasn't the only Argentinean failure this summer. Referee Nestor Pitana was trying to kid us into thinking he had a full head of hair by carefully combing his loose strands over his pate.

Sadly, his Bobby Charlton-esque attempts at fooling us were unsuccessful in each of the four games he officiated.

There are two reasons why the Selecao couldn't score against him. The first is that they are terrible. The second is that his huge plume of hair covers up a significant proportion of the goal.

If you'd like to know what Ochoa would look like with a more “normal” haircut, take a look at the lead character from  How I Met Your Mother .

During Portugal's group stage game with the USA, the Real Madrid superstar debuted a new accent to his signature look: A Zorro-style shaved pattern on the sides of his head.

It was rumoured that this was a move of solidarity for a child whom he is helping recover from a brain tumour, but this theory  was quickly debunked . It's just a bad idea.

For Portugal's final group game against Ghana, C-Ron dropped the “Z” by  drastically shaving the sides of his head . When it comes to hair, Ronaldo clearly appreciates fan feedback.

Nani
Nani
It seems that Portugal took a hair-trimming set with them to Brazil and everyone was keen to try it out.

After suffering a heavy defeat to Germany, Nani joined Ronaldo in the “hair art” club, by shaving star patterns into the side of his head, complete with his No. 17.

Evidently, it wasn't enough to inspire progress to the knockout rounds.

It's hard to know exactly what the Juventus star asked for when he went to the hairdressers, but he ended up with several asymmetric blond streaks of various heights. If Frank Gehry was a stylist, he might produce something like this.

Fortunately, his lopsided locks didn't prevent the Frenchman from picking up the Best Young Player award.

Dani Alves
Dani Alves
Dani Alves turned up for Brazil's opener with Croatia with perfectly normal hair. By the time the second game with Mexico came around, however, the Barcelona defender appeared to have let Neymar's stylist get his hands on his cranium.

Alves' decision to dye his locks white was fairly bizarre. And he did himself no favours when he decided to  slick it all back .

During his brief stint at Liverpool in the 2006-07 season, Gabriel Paletta sported long, luscious locks of hair. These days, not so much.

Italy's Argentina-born centre-back is balding at a tremendous rate but doing himself no favours by keeping the rest of his hair long.

It's time to take a razor to your dome, Gabriel.