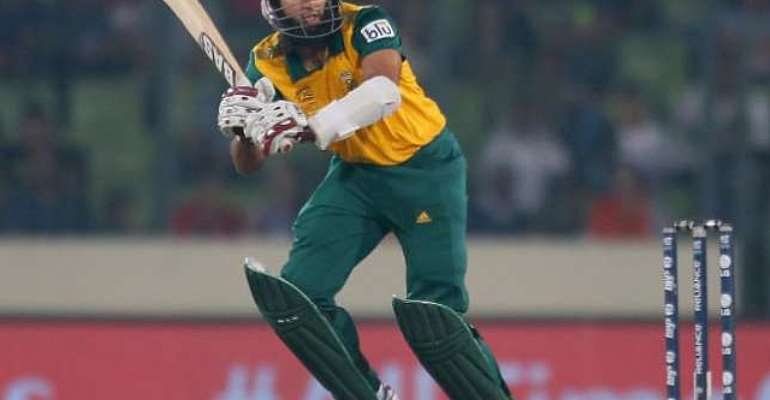 The opening batsman, recently made Test captain, compiled a trademark patient innings of 109 to provide the foundation for South Africa's first-innings total of 304-5.

Amla featured in a 151-run partnership with ODI skipper AB de Villiers for the third wicket as the tourists posted a challenging total on a slow wicket in Colombo on Sunday.

For long periods, Sri Lanka looked on course to reach their victory target but when Sangakkara departed in a disastrous batting powerplay for the hosts, all hopes of victory were lost.

South Africa made a strong start, Quinton de Kock the first to depart for 27, bowled by Angelo Mathews (1-30 from six overs) before Jacques Kallis was ousted for a second-ball duck, lbw to Ajantha Mendis (3-61).

That brought Amla and De Villiers together and, with both men enjoying second lives after being dropped, they went on to put their side in a strong position.

Once both had been dismissed the innings lost momentum, although David Miller's 36 off 21 balls provided some late fireworks.

Kusal Perera's 34 and 40 from Tillakaratne Dilshan ensured Sri Lanka were up with the rate in the early stages, and when Mahela Jayawardene was third out for 10, the score was on 122 with more than half the overs remaining.

From that point, as so often in the past, it appeared Sri Lanka's hopes rested on Sangakkara's shoulders, and the classy left-hander maintained a fluent rate of scoring in typically elegant style.

With 15 overs remaining and the score on 191-5, Sri Lanka opted to take their powerplay and after a superb start which saw Sangakkara take three fours from the first three balls from Ryan McLaren (2-33 from six), the innings unravelled dramatically.

McLaren bowled Lahiru Thirimanne for 15 and then claimed the big wicket of Sangakkara, caught by substitute fielder Faf du Plessis.

Sangakkara's demise signalled the end for the hosts as Imran Tahir (3-50 off seven) and Dale Steyn (2-38 off 7.3) secured an ultimately comfortable victory.