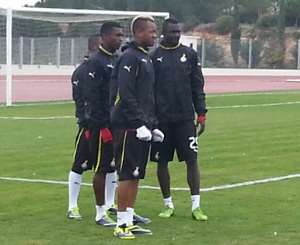 By Ameenu Shardow, follow on Twitter @alooameenu
Ghana defender David Addy completed his first session with the Black Stars ahead of the second-leg World Cup playoff against Egypt.

The Vitoria Guimaraes player has been unable to train fully with the rest of the team due to a minor ankle problem.

The left-back was however able to fully complete the session as preparations intensify ahead of Tuesday's clash against the Pharaohs in Cairo.

Addy's return to full scale training now hands the Black Stars a clean bill of health going into the game to be played at the Air Defence Stadium.

The team have been camping in the Turkish capital all week long for the match deemed by many as a mere formality.

Ghana carry a commanding 6-1 lead into the return clash on Tuesday.

It will therefore take a football miracle to strip the Black Stars off a place at next year's event in Brazil.

The Egyptians however remain hopeful of their chances despite knowing the odds are meanly stuck against them.

The Pharaohs will be banking on an expected resounding home support to carry them through to their first ever World Cup finals since 1990.