South Africa : 'Chief expected to be beaten by everyone' – Khune 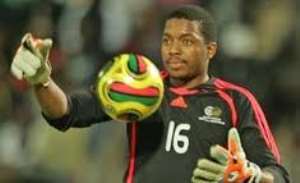 Kaizer Chiefs goalkeeper Itumeleng Khune is in a confident mood as the Soweto Derby looms.

The Amakhosi skipper tells KickOff.com that it is a “good time” to play their nemesis Orlando Pirates as Bucs are going through a slump in the domestic League - drawing one and losing the other in their last two League matches.

Khune, however, is cautious. “It is a good time to play Pirates, because they are going through a bad patch but when teams play Chiefs they go on sixth gear so we shouldn't go out to underestimate them. They are a big team and we need to give them the respect they deserve.”

Meanwhile, the 25-year-old adds that to say Chiefs are well on course to win the championship is premature despite being five points clear on top of the standings with nine matches remaining for the Phefeni Glamour Boys.

“It will be nice to win the League, but now, as the coach said, we still have 30 points to play for and we shouldn't be talking about winning the League at this stage.

“Anything can happen going forward because teams are now starting to plan for us. Everyone wants to beat Chiefs, so mentally we have to be strong because teams don't make it easy for us.

“So the first hurdle that we need to jump is Pirates on Saturday and if we can go eight points clear, maybe then we can start entertaining the idea of winning the League,” Khune concludes.