Government to roll out policies for Sports development 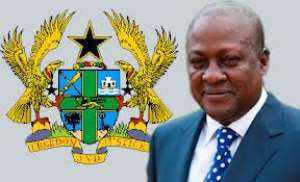 The President told Parliament in his maiden State of the Nation address on Thursday, that there will be provision of incentives for Metropolitan, Municipal and District Assemblies (MMDA) to establish at least one well-resourced sports and athletic infrastructure in each district.

He said government was committed to re-invigorating the traditional inter-school and colleges sports competition programmes while reserving a five per cent admission quota to Senior High Schools (SHS) for talented sports and other creative students.

Similarly, the President said the National Sports Authority (NSA) will undergo a restructuring and re-orientation exercise to enhance its efficiency and effectiveness to discharge its mandate.

He emphasized the government's commitment to developing the lesser known sporting disciplines in their quest to develop sports in its entirety.

Touching on other developments, President Mahama said the completion of the Cape Coast Stadium as promised by the late President John Evans Atta Mills will be carried through.