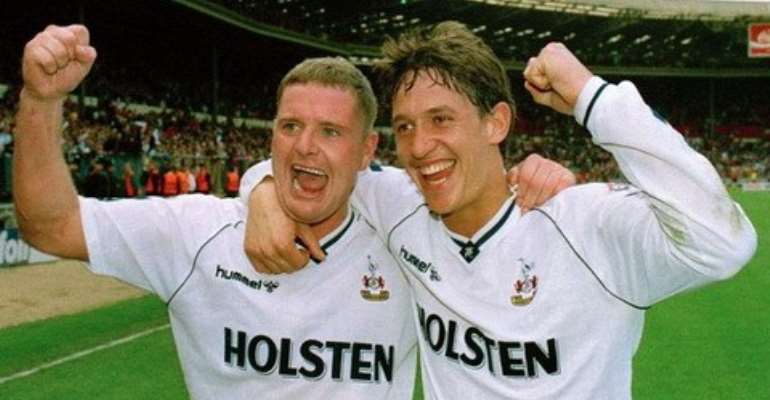 The 45-year-old was shaking and slurred his words on stage at a charity event in Northampton on Thursday.

Gascoigne, who openly admits to having problems with alcoholism, has spent time in rehab and was sectioned twice in 2008 under the Mental Health Act.

His agent Terry Baker told BBC Radio 5 live: "He won't thank me for saying it but he immediately needs to get help."

Baker added: "Whatever's happened to him in the five or six weeks since I saw him before Christmas, he is not as well as he has been.

"His life is always in danger because he is an alcoholic. Maybe no one can save him - I don't know. I really don't know."

Gascoigne's former Tottenham and England team-mate and Match of the Day presenter Gary Lineker tweeted: "Lots of you asking for my thoughts on Gazza's plight. I can only hope he finds peace somehow, but fear those hopes may be forlorn."

The Professional Footballers' Association say they will continue to support Gascoigne, as they have in the past.

A statement on their website reads: "The PFA continues to be concerned about Paul Gascoigne's welfare.

"The Union has provided assistance financially and medically, supporting the provision of rehabilitation and treatments received both in the UK and abroad.

"The PFA recently arranged a detoxification for Paul through the Sporting Chance Clinic. Regrettably Paul checked himself out and chose not to complete the programme.

"We would like to stress that the support of the PFA and the Tony Adams Sporting Chance Clinic remain available both to Paul and any other members in a similar need or circumstance."

The Northern Irishman died in 2005 aged just 59 after a long struggle with alcoholism.

"We are in regular touch with him and have been again. We go one step forward and two back at times and this is just the situation," Taylor said.

"If we are not careful, it is going to be akin to George Best. It is unfortunate, but we try to keep going."

Gascoigne's drinking problems started during his playing days. In 1998, shortly after his divorce from wife Sheryl, he was admitted to the The Priory Hospital in Marchwood, near Southampton, to receive treatment for stress and drink problems.

In 2001, whilst playing at Everton, Gascoigne admitted himself to an alcohol rehabilitation clinic in Arizona on the insistence of his then manager Walter Smith.

Four years after retiring, in 2008, he was arrested in Newcastle and detained under the Mental Health Act and was later sectioned following reports that he was acting strangely in Hemel Hempstead.

More recently he has been treated at The Priory again and the Providence Projects treatment centre in Bournemouth.

The former Newcastle, Tottenham and Lazio player was appearing in "An Evening with Paul Gascoigne" at the Park Inn in Northampton on Thursday and Baker says that he tried to cancel the show after he saw that Gascoigne was drinking.

He said: "He wasn't in the condition he'd been in for the last two years. He was slurring a bit.

"I phoned the organisation and said it was possibly best we didn't put him on but he was insistent he had some new jokes and he was going to be in tip-top form. He was fairly upset but insisted he wanted to go on.

When asked why Gazza was upset, Baker explained that a friend had recently died in a medical facility - whilst holding his hand - and that it was "haunting him".

Baker says he spoke to Gascoigne again on Saturday and that he was "fairly incoherent".

Former Manchester United goalkeeper Peter Schmeichel has called on the PFA to do more to help Gascoigne.

After a video of the event in Northampton was put on The Sun's website, Schmeichel wrote on Twitter : "This is not fun watching. Gazza needs help. Come on PFA and (PFA chief executive) Gordon Taylor, time to step up.

"We are all responsible for how we live our lives. But that doesn't mean we can't step in and help.

"There is always a 'right' time to start doing something, with what we've seen from Gazza, time has come for football."

He said: "I swear to you I have never seen Paul drink in all the time I've known him, until very, very recently.

"He has definitely been clean for most of the last two years, absolutely for definite. He has made huge massive efforts to get his life on track and it's just gone a bit wrong at the moment."

30,000 Disqualified From Voting On December 7
47 minutes ago